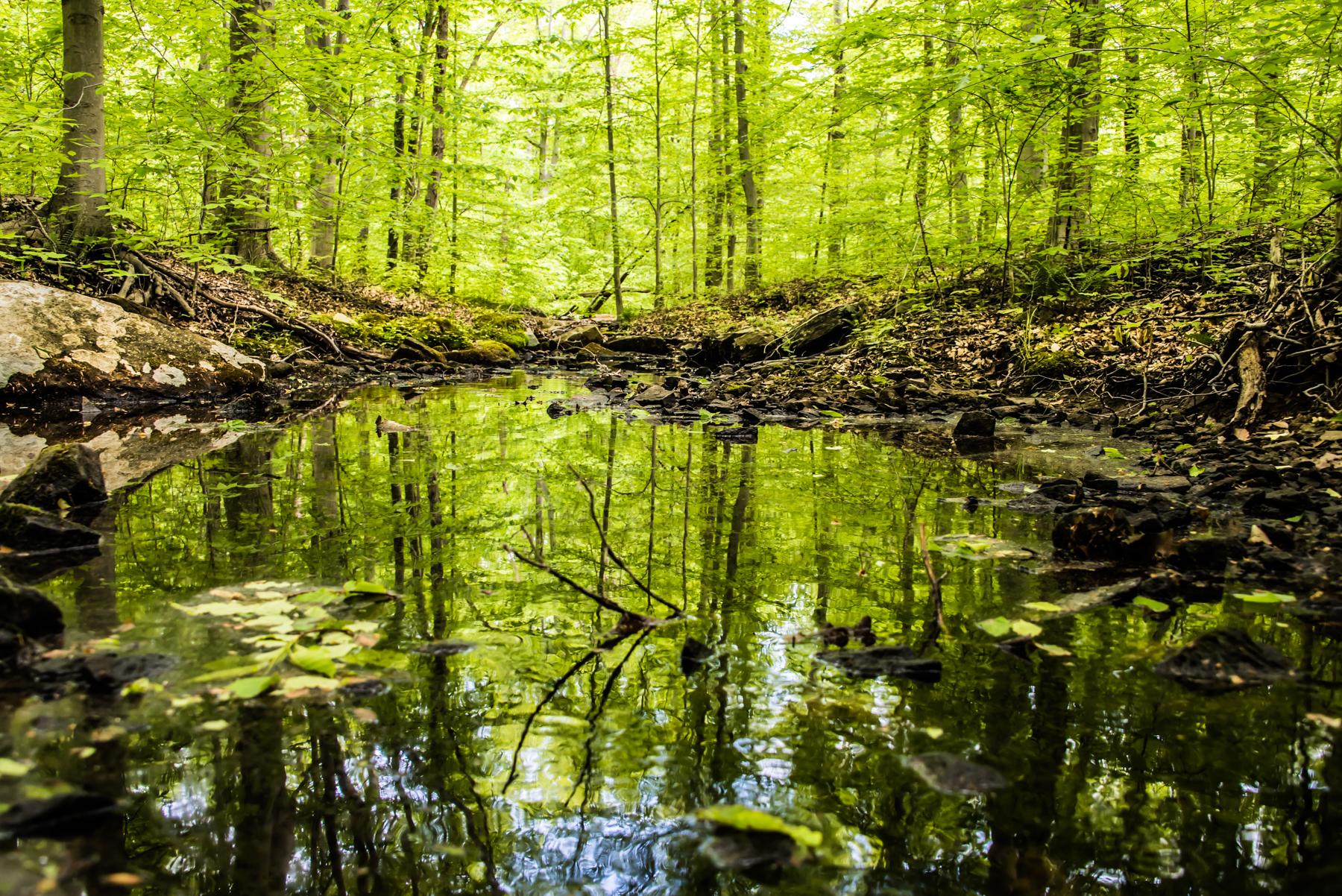 I was walking on a trail that parallels the Stony Brook when I saw an opening between the path and the water, so I stepped into it and went to the water’s edge. Whenever I am hiking and see water I go toward it.  While at the water’s edge I took a better look at the reflection of the surrounding forest; then I watched some water striders scuttle across the surface with the same ease as ants walking on a sidewalk; I watched the ripples where the water met a stone; I looked through the water at the stones on the stream bed, covered with moss and looking like fuzzy pillows; I watched the dance-like progress of a leaf that was pushed this way and that as the current went around stones or tree limbs that had fallen.
When I reflected on my position at the very edge of the bank I thought about the wonderful opening pages of Herman Melville’s Moby Dick, where he says that if you walk around the perimeter of the island of Manhattan—to circumambulate it, as he so elegantly says—you will find sentinels posted at every point where the land meets the water. Melville assures us that those sentinels are not satisfied to be near the water, they are as close to it as they can get without falling in. Like Melville’s sentinels, the mystery of water compels me to be next to it. I am drawn to it like a tick to a hiker’s leg.
Some of the mysteries of water are not so mysterious to scientists but there is much about water that mystifies me. How did the first water appear on earth? How much water is there? Is more water being made all the time? Are we threatened to run out of water? How do two hydrogen atoms and one oxygen atom actually join to form a water molecule? How much of the earth’s water is fresh and how much saline? How much of the freshwater is available for human use?
Although no one knows for sure how, when or where Earth’s water came from, the prevailing theory from astrophysicists is that about a billion years after Earth was formed an asteroid, or asteroids, or comets, or meteors, or with all of the above-brought ice when they crashed into Earth. By that point in its history, Earth was cool enough and had developed enough of an atmosphere to keep the water. A countervailing theory is that there were no extraterrestrial bringers of ice; instead, deep within the Earth the temperature and the pressure were just right (a temperature of about 1400 degrees Celsius and pressure 20,000 times greater than atmospheric pressure) to cause hydrogen and oxygen to combine and make water, which was then brought to the surface with magma from erupting volcanoes.
The people who believe that water was brought here from outer space and those who believe that it was made deep within the Earth agree that no meaningful amount of water has been added to or subtracted from the Earth since the original water-creating events. At different times in Earth’s history water has been distributed differently; right now the oceans are rising and the American West is drying up. Further, there are often changes in the proportions of the various forms that water takes. The balance between its solid form (ice and snow), its gas form (water vapor) and its liquid form is continually changing.
Here are some important facts that I discovered about water: a) 75% of the Earth’s surface is covered by water; b) 97% of the water on Earth is saltwater; c) 68% of the freshwater is permanently locked up as ice or snow; d) the majority of available water is groundwater, which is freshwater beneath the ground.
The idea that all of the water in the world has been here for three and a half billion years—recycling almost infinitely—is a startling thought to me. Three hundred and seventy-five million years ago the first creature left the water to live on land; the water it left behind is still here. A hundred million years later the dinosaurs drank water that is still here. The water that human ancestors drank five million years ago is still here. The water in the wine that Socrates drank with his students in the Athenian forum is still here. The sweat on Michelangelo’s brow five hundred years ago when he painted the ceiling of the Sistine Chapel is still here. The history of every drop of water is the history of Earth.
Another appeal of water is its contradictions. Nothing is softer and more flexible than water, yet water wears away mountains. The surface of still water is often a visual barrier; its reflection is all that can be seen, yet water is completely transparent. Water is cohesive, yet put your foot in it or throw a stone into it and it is easily penetrated and broken into drops. Water contains no color, yet when it becomes ice or snow it is white. 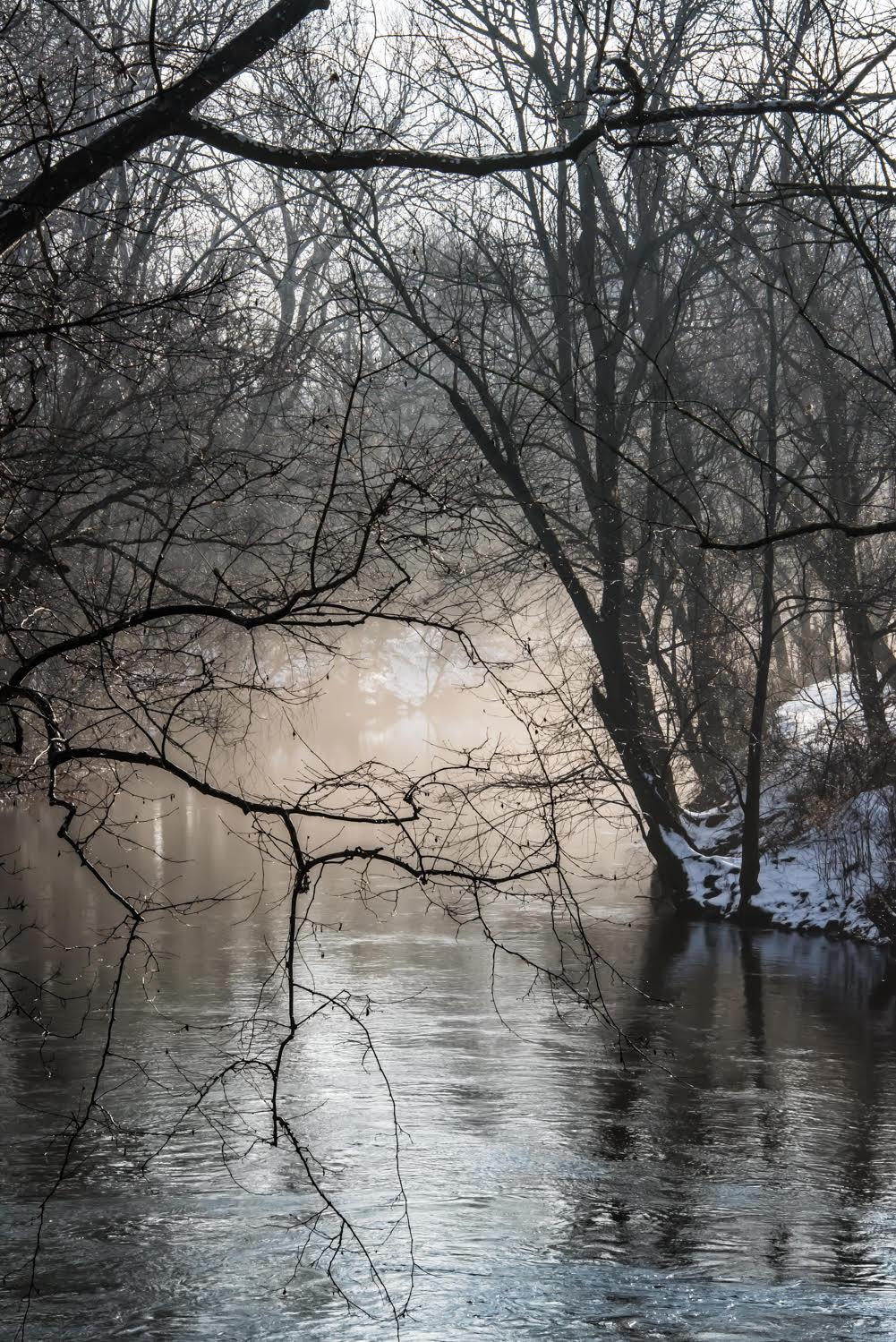 This is a picture of water; flowing water, frozen water (snow on the bank) and water vapor (fog in the background). Even the trees are fifty percent water.

The Sourland landscape was formed by water. The network of streams that lace the Sourlands has shaped the topography. The shale we see today was formed when sediment drifted to the floor of the ocean that once covered this land. The diabase rocks that are now strewn across the land are volcanic in origin but have been exposed largely through water’s erosive force as well as from the process of uplifting that is caused by the cycle of water freezing and thawing. Water has moved soil from high land to fertile valleys. Water has eroded the Sourland’s boulders, depositing minerals in the soil. The living parts of the landscape are nourished and sustained by water. The pattern of human development reflects the availability of groundwater.
I have had trouble knowing what to include and what to leave out of this essay because the subject is so vast. I began to think that in selecting water for a topic I had bitten off more than I can chew, but then I realized that this metaphor doesn’t hold water, so I will just end it.