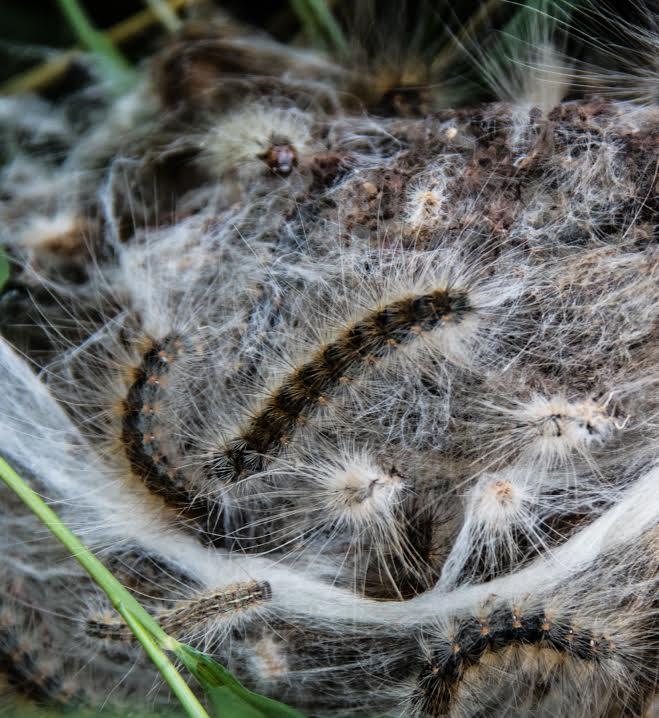 Tent caterpillars are social; hundreds can share the same nest and they often entwine for protection from the cold.

Every year in early autumn an undistinguished-looking brown moth known to scientists as Malacosoma americanium flies to a place in a tree where two branches intersect and lay between 150 and 400 eggs.  She then secretes a foam-like covering over them to keep them moist and to provide some protection from predators. Then she dies.  And then a really interesting drama unfolds.  Well, it isn’t very interesting at first because the eggs do not hatch until early the next spring, but once they hatch the drama of tent caterpillars begins.

When the hours of daylight increase to a certain point in the spring the eggs hatch and then begin to build their nest.  They secrete a silky material through their mouths and build not just a tent, but a tent within a tent, within a tent.  The number of layers may vary, and each layer is surrounded by air, creating insulation.  This results in a nest with different amounts of insulation. This insulation is necessary because the caterpillars emerge when leaf buds are opening, and the temperature can be quite irregular at that time, especially at night when it can become quite cold.

Tent caterpillars are both a highly social insect and, at least compared to ants, rather individualistic.  They live together in the tent and are often entwined into a caterpillar ball in order to gain additional protection from cold temperatures.  But they feed by leaving the tent one by one and finding suitable leaves to eat.  Usually, the moth lays her eggs in a fruit tree—a wild cherry is quite often the host in the Sourlands—but black walnuts are frequently used, and many other tree species are sometimes the host.  I have even seen a tent on a staghorn sumac tree.  As the caterpillars crawl along the tree limbs looking for the new leaves they leave a pheromone trail that will help them get back to the nest.  If they have found a particularly good source of leaves they will leave a different pheromone trail on the way back to the nest which will guide their nest mates to this spot.

The different temperatures in the nest are important because tent caterpillars cannot digest their food unless the temperature is right.  Since they often digest in the nest they also eliminate waste in the nest and by mid-summer, the nest often becomes an unsightly mess, full of dead leaves and twigs, flying insects are often caught in the silky material because it is sticky, and little black pellets that are the caterpillar fecal material can be easily seen.

A large infestation of tent caterpillars is very unlikely to recur two years in a row.  Their population size is cyclical, reaching a peak every nine to sixteen years.  In fact, the recommended treatment for trees with tent caterpillars is to do nothing.  The caterpillars may defoliate much or even all of a tree’s leaves, but unless the tree has underlying health problems it will be back, fully foliated the next spring. 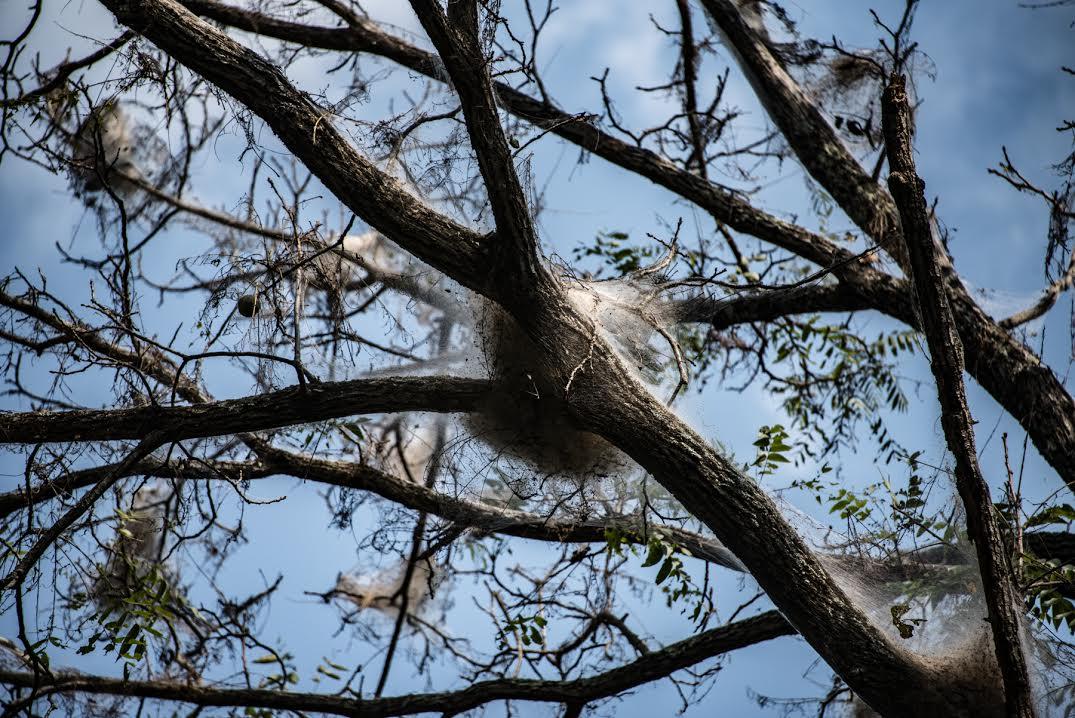 If the nests are not too full of leaves and other debris they can be like silk pods stuck in a tree, very lovely to an objective eye.