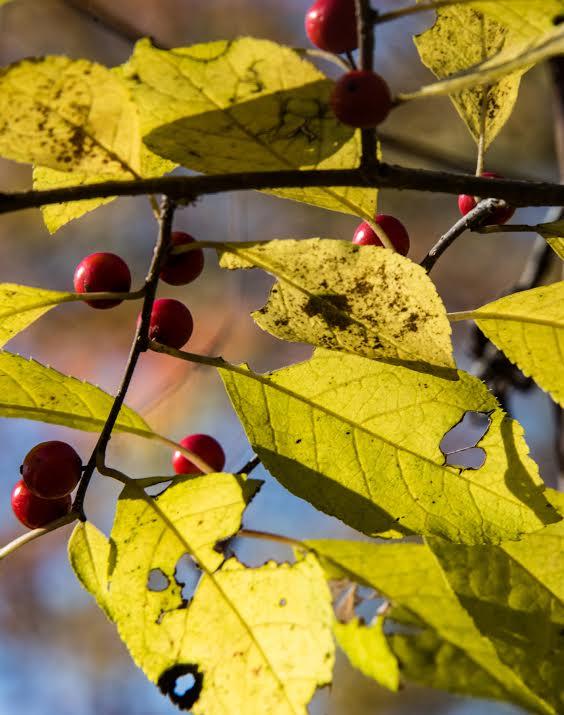 In autumn, spicebushes’ leaves turn a lemony yellow and their berries are an attractive red—especially attractive to hungry migrating birds. The many holes in the leaves in the above photograph may have been the result of feeding by the larvae form of a spicebush swallowtail butterfly, an especially beautiful resident of the Sourlands.

For a little over half of the year, when trees in the Sourlands have leaves, the canopy captures up to 95% of the sunlight, leaving little direct sunlight for the understory plants. That is a serious disadvantage, but that is not the only disadvantage that the understory plants have. Their other big problem is that the roots of the canopy trees are so extensive that they collect most of the water and nutrients from the soil, leaving the understory trees, shrubs, and herbaceous plants to live on whatever is left.

But those plants living in the understory have some coping methods.  The shrubs, like spicebushes, thrive where the canopy is less dense, or along forest edges, or in a gap created by a fallen or dead canopy tree. Another way that shrubs cope with their stressful habitat is to develop their leaves and flowers early in the spring, catching the sunlight before the canopy trees leaf out. Some shrubs have dense clusters of leaves and others, like spicebushes, have large leaves; more leaves or bigger leaves means more photosynthesizing units. Another coping mechanism that spicebushes display is to conserve their energy. When they receive ample sunlight they will have many flowers and fruit, but if the amount of direct light that reaches them is slight they put their energy into supporting themselves instead of into flowering and fruiting.

I have been referring to the “understory” as though everyone agrees on what that term means, but there is a wide divergence among botanists about how many layers there are in a temperate forest. Some say that there are three layers; the lowest is the forest floor (the soil, animals that live in it, rocks, fungi, and sometimes including moss on the soil’s surface). Above that they assert that everything between the floor and the canopy is the understory—everything from ferns and tiny wildflowers to tree saplings. The canopy (mature trees) constitutes the third layer. Other botanists cite six forest layers: floor, herbaceous (non-woody plants like wildflowers and ferns), shrubs, understory (immature trees and trees that don’t grow tall), canopy, and emergent trees (those trees that emerge above the canopy trees). I subscribe to the latter definition, with the caveat that there is not an emergent layer in New Jersey’s forests. I like the more complex view of forests because it recognizes the important difference among the plants growing beneath the canopy. Ferns and herbaceous plants like skunk cabbage, and shrubs like spicebush or blackhaw viburnum have very different roles in the ecology of the forest, and I find it useful to think of them separately.

Under any definition of the understory, it is a vital part of forest ecology. It has a great variety of plant species and the majority of animals that live in forests live within six feet of the ground.

The first thing that comes to my mind when I think about spicebush is its aroma, which I love. It perfumes the forest air with a tangy scent that I believe to be the definition of a forest in summer. Upon studying this plant, however, I have realized that its fruit is a really important contributor to forest ecology. Mature spicebush plants develop tiny yellow flowers before the leaves come out in May, and by late summer the flowers have turned into bright green berries, which, in turn, change color to become bright red by the middle of September. Spicebush berries have a very high level of fat, and they become ripe just as many of the fall migrating birds come through New Jersey, looking for fuel to continue their remarkable flights to warmer areas. They feast on spicebush berries, as do raccoons, opossums and deer.

Native Americans had many uses for spicebush. They made tea from its bark, which they drank as a blood purifier, for colds, fevers, to induce sweating, and to alleviate the pain of rheumatism. By pressing the berries they made an oil that they applied topically for relief from arthritis or to ease the pain from a bruise.

Many sources that I consulted recommended special techniques for eating the berries. They can add spice to applesauce, or they can be ground and substituted for cinnamon, or allspice. They also recommend the taste of a tea made by putting leaves or twigs from spicebush into boiling water. The berries look so delicious that I have taken a small nibble from them on a number of occasions, each time hoping that I missed something the last time; unfortunately, I have always found them too bitter to enjoy.