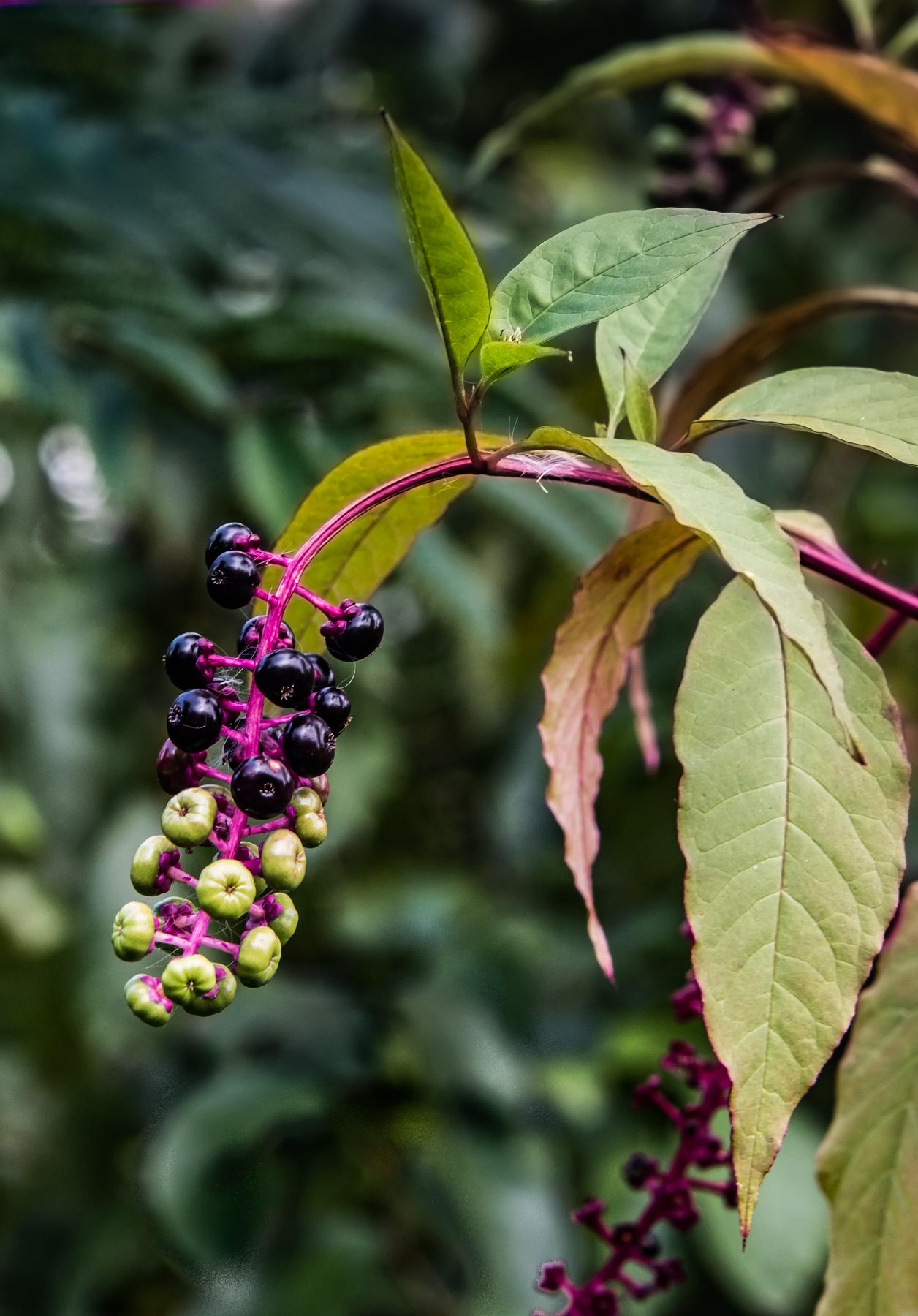 Pokeweed is spectacular in fall.

Most descriptions of pokeweed start with a warning that pokeweed is poisonous. Everything about this plant is poisonous; ingesting its roots, its stems, its leaves, and its berries can harm or even kill most mammals—including humans. Some people even warn that touching pokeweed can cause chemicals to penetrate your skin and harmfully affect your blood.

The respectable medical websites make unambiguous statements that there is no scientific evidence that there is any medical benefit from the use of any part of pokeweed. But article after article on the Internet starts with warnings and then goes on to describe pokeweed’s use as both a food and as a medicine. One writer described his horror when his four-year-old son ate a handful of the berries, but then he revealed that he consulted his wife and they decided not to do anything for the boy because, “It is the seeds, not the berries, that are toxic, and our son is more of a gulper than a chewer.” (This was a reminder that intelligence is not a prerequisite for writing a blog—or for becoming a parent.) His son survived; he went on to advocate various recipes for pokeweed.

Pokeweed’s leaves have been used for various ailments dating back to the Native Americans, who placed great value in purifying the body and ate the leaves as a purgative. They also made a paste from the leaves that they used as a topical cure for arthritis and rheumatism. I could not find any description of how Native Americans prepared pokeweed before using it.

The leaves contain a substance called pokeweed antiviral protein (PAP), which inhibits viruses from replicating themselves in the pokeweed’s cells, thereby stopping a virus’s spread. Some alternative medical practitioners have noted the way PAP protects pokeweed and recommend PAP as a cure for viruses in humans. They advocate its use for viruses like AIDS, but also for many maladies besides viruses, including tonsillitis, laryngitis, acne, painful menstruation, mumps, and skin cancer.

If the leaves are boiled for a long time and the water is changed at least three times during the boiling, their toxicity is removed. As soon as I read about this procedure I wondered how many people died or became ill before it was resolved that at least three boilings in new water are necessary to make it safe. One source that I found refers to “many cases” of poisoning from pokeweed in nineteenth-century America.

When they first emerge from the earth the new shoots of pokeweed are not toxic. They were a popular dish in the American South, reportedly tasting like asparagus. Into the 1990s there were two companies that canned and sold pokeweed shoots, but neither company is still in business. Asparagus is pretty available now.

A puzzling array of animals is immune to pokeweed’s toxins. Birds, raccoons, possums, foxes, and mice eat the plant and suffer no ill effects. The seeds pass through these animals’ digestive tracks unscathed, so these animals are the principal propagators of pokeweed. There is a different kind of danger if birds eat the berries too late into the fall because the berries can ferment while still on the plant, intoxicating the birds.

Another common name for pokeweed is inkberry, a name that became common because the fermented juice from the berries was used as ink. It was particularly important in America from the late eighteenth through much of the nineteenth century because regular inks were not always available in remote areas. Revolutionary War and Civil War soldiers often wrote letters home using pokeweed ink. There is a myth that the Declaration of Independence was written with pokeweed ink, but the National Archives has determined that this is not true.

Contemporary artists, particularly calligraphers, have rediscovered pokeweed ink and use it to achieve a blackish magenta effect in their art. Weavers sometimes use pokeweed juice to dye cloth a pale pink, and basket makers sometimes use it to dye their reed baskets.

Pokeweed, which is native to eastern and southern United States, was planted in California and parts of Europe, particularly Portugal because the juice from its berries was used to make some red wines look better. That practice is no longer legal, but pokeweed has become naturalized in California and it is an alien, invasive plant in Europe.

Pokeweed brings a vigorous green to abandoned railroad rights-of-way, neglected lots, and scraps of land that no one tends. It is especially attractive in early autumn when its stems are magenta and its berries are shiny black. They look delicious but I am passing on eating any part of it or using it to cure maladies for which there are medicines available in my drug store.