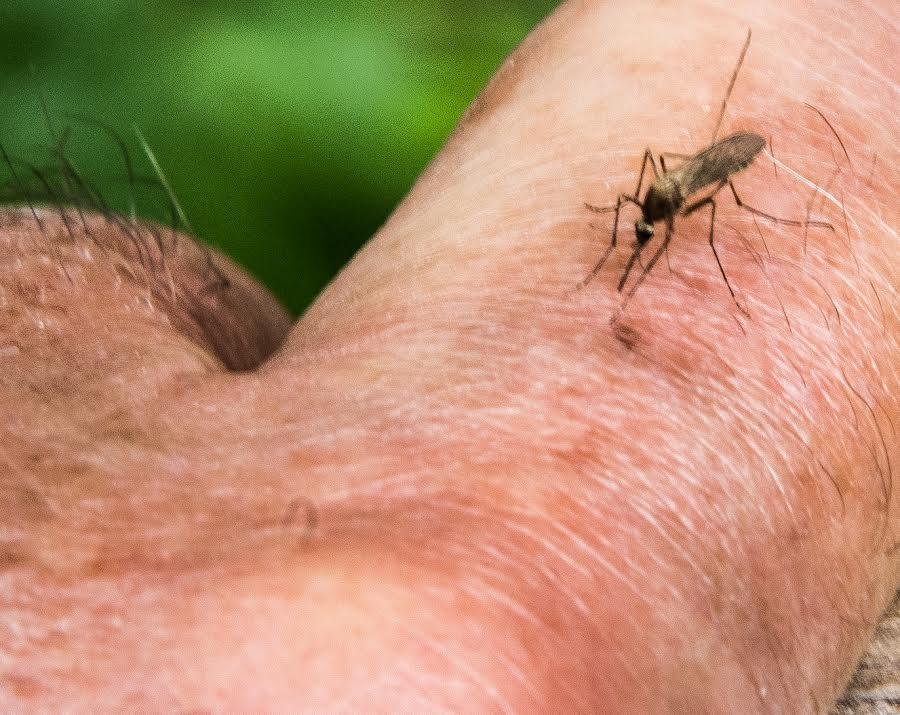 I had to resist swatting this mosquito until I had photographed it.

My family and I were having a pleasant evening in our rented Maine vacation house when mosquitoes suddenly inundated us. It didn’t matter how many we swatted, there were always more. After a while, we discovered that one of us, wanting to get some fresh Maine air, had opened a window without noticing that it did not have a screen. After we got the window closed and the mosquitoes more or less under control we started asking each other questions about mosquitoes.

How often does a mosquito bite? Only the females bite, and they bite as often as they need to in order to fill their abdomens with blood, which they use to nourish their eggs. Mosquitoes do not bite for their own nourishment; they feed on nectar and juice from berries and fruit. Male mosquitoes never bite.

What causes that annoying high-pitched noise that they make when they are flying around your head? That sound is produced from the very rapid flapping of their wings—up to 250 times per second. The noise is also a signal that females use to attract males.

Are they dangerous or merely annoying? There are many parasites and viruses that mosquitoes can spread; malaria, Zika, West Nile, yellow fever, and dengue fever are the most common. All can be fatal but fatalities in the United States from any mosquito-borne illness are rare and generally those who die are visitors who contracted the disease elsewhere. In the United States, the most common mosquito-borne diseases are the West Nile and Zika viruses. Both of these viruses usually cause only mild illnesses but Zika can become very serious if a pregnant woman contracts it; she could have a miscarriage or a malformed fetus.

How do they locate us? Mosquitoes track humans and other mammals in several different ways. They do not have precise vision but they can perceive a human from about fifty feet. They also have a specialized organ that can detect the carbon dioxide that is released in exhaled breath. When they get closer they use heat to track the exact location of any exposed skin. Other clues that a mosquito uses to find a human victim explain why some people are more susceptible to being bitten than others. Mosquitoes are attracted to several compounds that are on human skin, including lactic acid and ammonia, that are present in greater concentrations in some people than in others. Mosquitoes are also attracted by perspiration, and some people perspire more than others. Further, mosquitoes are attracted to colognes and perfumes and to people who are wearing dark clothes.

Do mosquitoes play a positive role of any kind in the ecosystem? They pollinate some plants, they are food for many birds and amphibians—particularly frogs—and just by being a threat they have probably slowed the development of the tropical rainforest.

What is their history and the history of their impact on the world? Mosquitoes have been around for more than a hundred million years—long before human beings—and have always been most commonly found in tropical areas. Demographers believe that in the history of the world about 108 billion people have been born and that nearly half—52 billion—mostly young children, have died from mosquito-borne illnesses. They have had a profound impact on the history of South and North America. Prior to the European conquest, the population of the New World is estimated to have been about 250 million people. One hundred and fifty years later there were only about 5 million natives alive on both continents. While the Europeans slaughtered great numbers of natives, the precipitous decline in population was mostly due to yellow fever and other diseases that the Europeans brought and mosquitoes spread. In turn, when European armies were sent to the Americas to quell rebellions they had to fight new strains of these mosquito-borne diseases as well as the rebelling colonists. The victories for independence in both North and South America were greatly supported by mosquitoes.

When I am being driven crazy by mosquitoes I sometimes find myself thinking that it would be a better world if they did not exist. That thought is checked, however, by fear that there would be dire unknown consequences from the elimination of mosquitoes. To my surprise, some scientists have concluded that except for the threat that they pose to people intending to develop the tropics, all of the good things that mosquitoes do could be carried out by other insects. Hoorah!