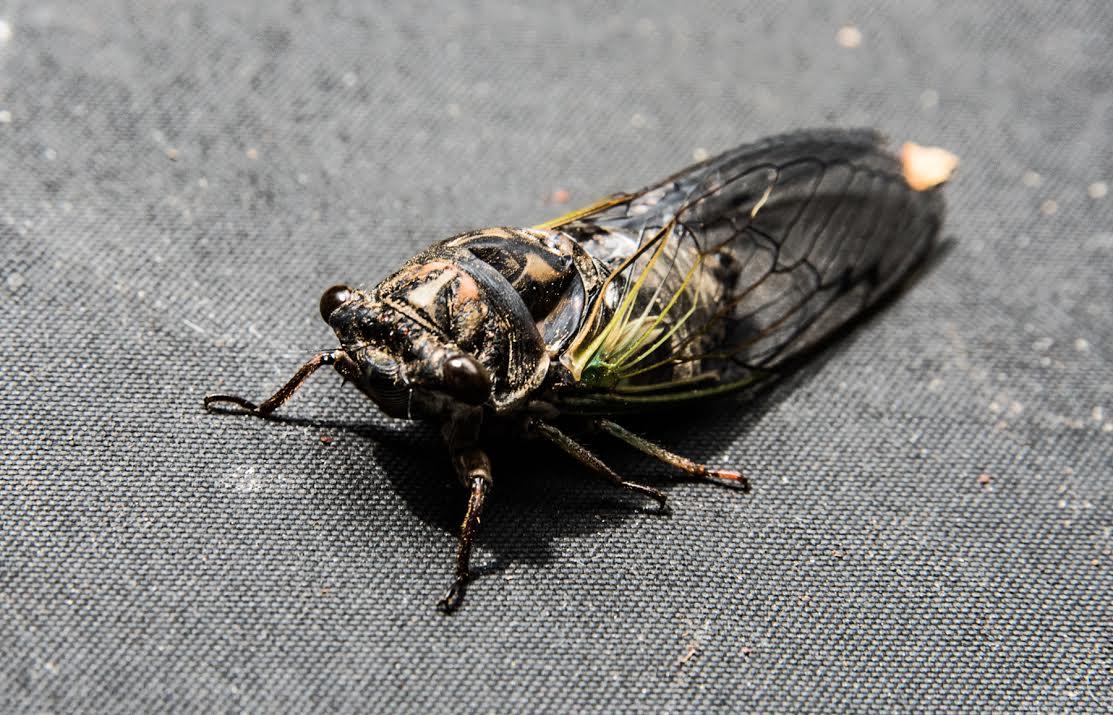 This is a dog-day cicada, named because its peak period of singing is in late summer when the constellation Canis Major (Big Dog) rises before dawn in the east. This period is known as the “dog days” of summer.

I was sitting on my patio one summer afternoon and saw that my dog was behaving oddly.  She had found something on the bricks and tried several times to pick it up with her mouth.  She dropped it hurriedly each time and then pawed at it with one of her front feet.   I went over to check and saw that it was a cicada, not dead yet, so I picked it up and put it out of my dog’s reach.  Then I dashed into the house, got my camera and took the above photo.  Eventually, the cicada recovered and flew away.

I knew that cicadas do not bite or sting but still, it frightened me a bit to have it in my hand because it is a really ugly bug and when I picked it up it started vibrating and squawking.

Their singing, intended to attract female cicadas, is often described as being like a chainsaw, but it is evidently melodious to female cicadas who have responded to it for eons, and it is one of the things that define summer for many of us.

There are a couple of misunderstandings about cicadas.  I suppose I should start listing misunderstandings by admitting that my assertion that they are ugly is an opinion that is not shared by everyone; one entomologist that I read referred to the “gorgeous” adult cicada.

Their looks aside, there are two main misunderstandings about them. The first is that many people confuse locusts and cicadas.  They are completely different insects; locusts are grasshopper-like in looks and genetic heritage, while cicadas don’t look at all like grasshoppers and are in a different insect family.  This confusion dates back to the early European colonists who, when confronted by vast numbers of seventeen-year cicadas, thought that they were witnessing what the bible describes as hordes of locusts.  There are no locusts in New Jersey, nor for that matter in all of North America.

There is also confusion because there are many different species of cicadas. Some species are called ”annual” cicadas because every year some of them are active above ground.  In the other species, called “periodical” cicadas, all of them are active above ground every seventeen or thirteen years.  We do not have the thirteen-year cicadas in central New Jersey and we last saw the seventeen-year cicadas in 2004; that means that we will see them again this year, in late May of 2021. There can be as many as one and a half million periodical cicadas in one acre of woodland, active above ground at the same time.

All cicadas feed the same way.  They have a sharp, needle-like appendage to their mouths which they use to penetrate roots or small limbs and through which they suck glucose from the tree’s xylem tubes.   Whether they are under or above ground they do not take enough glucose from their host trees to really harm them.

All the different cicadas look pretty much alike and behave similarly, but there are slight differences in the color of their markings.  Their life cycles are also similar—except for the long delay in emergence for the periodical cicadas.  They all hatch from eggs deposited in small tree limbs, drop to the ground, burrow down until they find a tree root, attach themselves to the root, withdraw nourishing fluid from the roots’ xylem, molt a couple of times, emerge from the soil and climb a tree, molt again into mature cicadas, mate, and the females deposit the eggs.  The annual cicadas go through this process in three years. The adults of all the cicada species die within a month of breeding.

As far as I have been able to determine the periodical cicadas do not gain any advantage from their long life underground.  Their synchronized emergence, however, does give them an advantage as a species; their vast numbers make it impossible for their predators to make a dent in their population.

This is the buzz on cicadas.