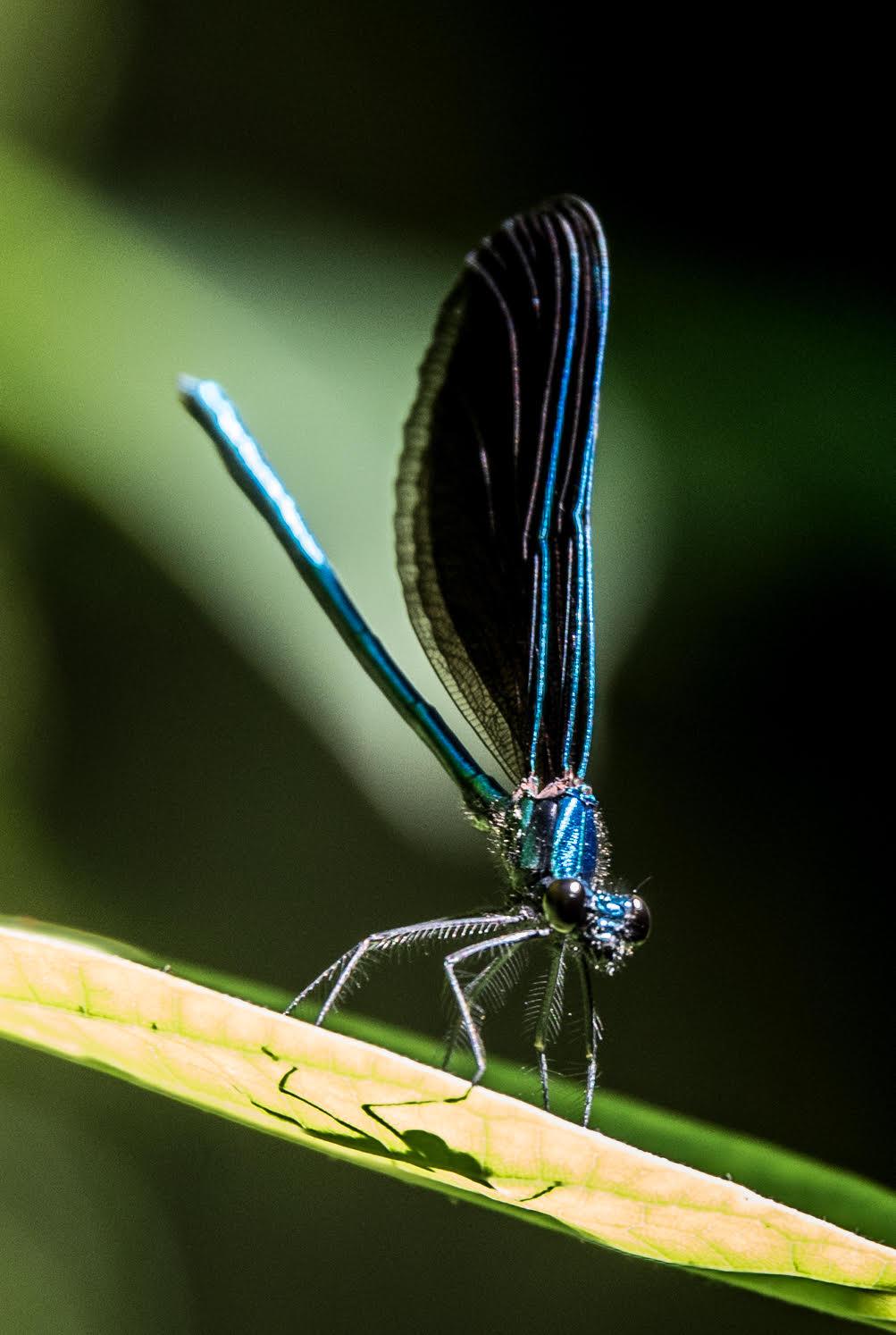 This ebony jewelwing damselfly was looking right at me while I took this picture, but since—like all insects—damselflies have compound eyes, it was also looking at its shadow, at a limb above it, and checking to make sure nothing was threatening it from either side, all at once.

About half of all known living organisms are insects. They can be found on every continent and in every habitat except in deep oceans. There are estimated to be nine quintillion insects in the world—a quintillion is a one with eighteen zeros after it. I am not sure if it takes a lot of hubris or stark ignorance to try to write a meaningful essay of about a thousand words on this vast subject, but I will plead guilty to any charge you wish to bring because I want to do it.

Getting back to the number of insects in the world, I find it impossible to have a real feeling for what a quintillion is. I can begin to understand it when I read that there are more than two hundred million insects for each person in the world. Another way of gaining some perspective on this number is that the combined weight of just those insects that are caught in spider webs is estimated to be twice the weight of all the humans in the world.

The definition of an insect includes the following:

Nearly all life on earth would perish if it were not for insects because most plants rely on insects for pollination and without pollination seeded plants could not reproduce.

In addition to pollinating plants, insects perform a number of functions that are important to humans. They are not only an important part of the food chain for birds, reptiles, amphibians, and mammals but the United Nations Food and Agriculture Organization estimates that the diet of two billion people includes insects. People eat crickets, grasshoppers, bees, termites, and ants. One company in the United States that cans insects for food refers to them as “micro livestock.”

There are some insects—in addition to bees—that are important to food production. A ladybug can eat up to 5,000 crop-eating aphids in its one-year life span. Praying mantis larvae also eat aphids—up to fifty a day. Dung beetles recycle cow manure on dairy farms—where cow manure is a big deal—and that saves the US dairy industry $380 million every year.

The rate of extinction for insects is eight times greater than the rate of extinction for birds, mammals, and amphibians. More than forty percent of insect species are in decline and thirty-three percent are endangered. It is estimated that the world is losing two and a half percent of insect species every year. The causes are the usual suspects—climate change, excessive use of chemical pesticides, and loss of habitat.

The extinction rate is not easily reversed but there are a few things that we can do to help. Cutting down on the size of lawns would help because lawns are a desert of inedible and uninhabitable plants. It would help to change the way that food is produced; instead of industrial-scale farms that now produce most of our food, it would help to increase the number of smaller, organic farms. It would also help to leave messy areas messy. Road and railroad rights of way, wetlands that cannot serve as pastures or crop fields, and generally unused spaces do not need to be sterilized and made pretty. It would also help to turn off outdoor lights because light pollution distracts and confuses insects.

I have almost reached my goal of one thousand words and I have only begun to cover all that I wanted to, so I will discuss some of the more interesting insects individually in future essays.