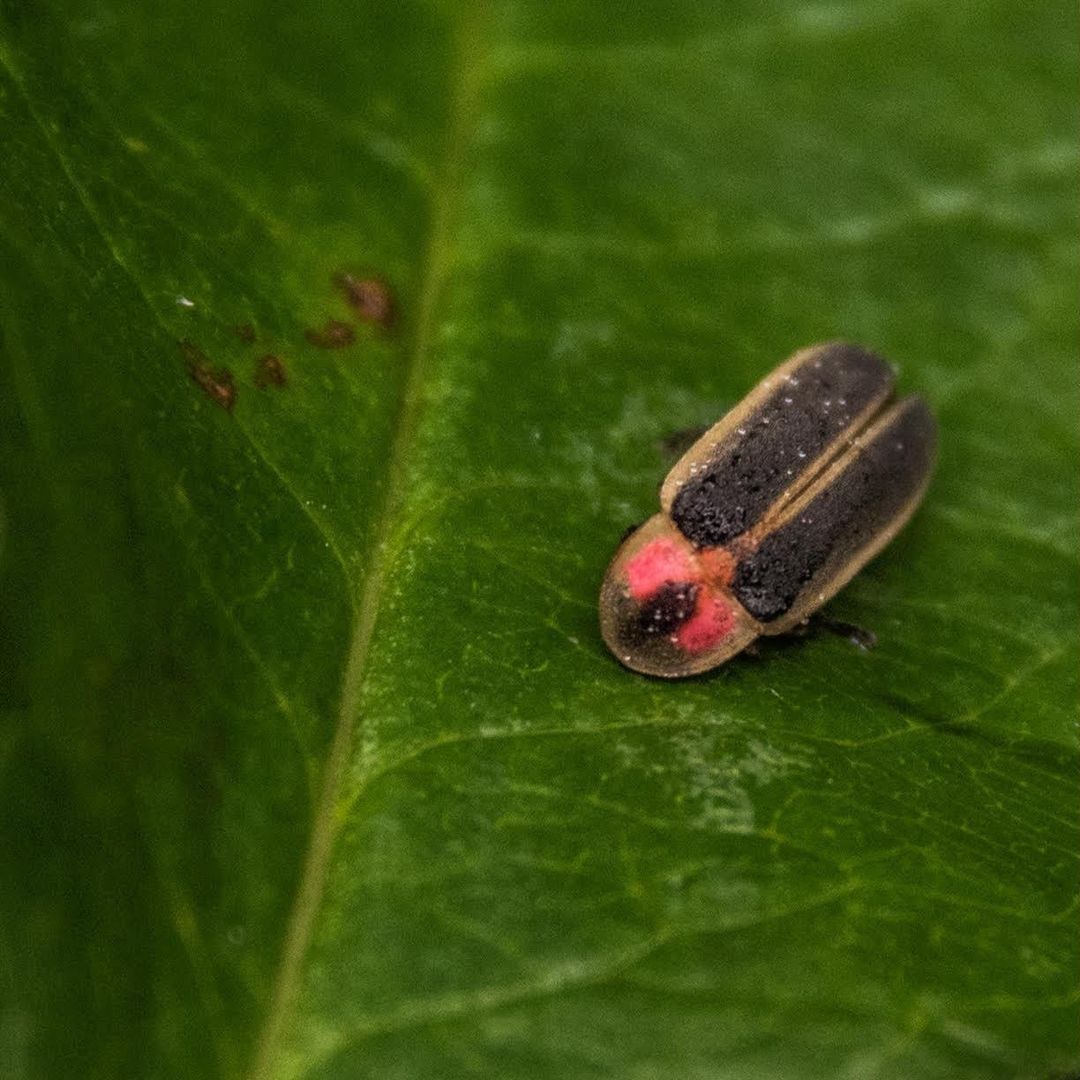 Fireflies have good eyesight, which as nocturnal insects, suits them. The two orange blobs on their head, shown in the above photo, are coloring on the cover of their thorax; they are not eyes.  Their eyes can only be seen from the side or bottom.

I thought that an essay on fireflies would be short and wouldn’t have much substance; it would mainly be my exclamation about how astonishing it is that a beetle (a firefly is not a fly, it is beetle) can fly around and periodically light up the rear part of its body.  That, plus an expression of my fondness for this insect, seemed like about all that I could say.

After doing some research on fireflies I am still astonished by their ability to flash and I am still fond of them. I have never heard of a person who doesn’t agree that they are delightful, especially children; they are easy to catch, they do not bite, sting, or pinch when they are caught and they are likely to flash again while they are in a child’s hand.

But after reading about them I have discovered how interesting they are: there is a lot to say about them.  First, I want to discuss their place in the ecology of their habitat. Fireflies contain a substance that is toxic to other animals that eat them; it is similar to the toxic chemical that toads use as a defense.  Any animal that tries to eat a firefly does not make a second attempt.  In turn, no one knows if fireflies eat anything during the three to four weeks of their adult lives.  Some entomologists speculate that they might eat pollen, midges, or other tiny insects, but any speculation about their diet is unconfirmed. Nor are they pollinators.  If they visit a flower their hard exoskeletons prevent them from gathering pollen to carry to another flower. Even their flashing seems to be entirely for themselves—they use it to communicate with each other, mostly as a way to attract mates.  Fireflies live in their own world, making no ecological impact on their habitat or on other animals that share their habitat.

When I did some research on how fireflies are able to glow I learned that interest in their glowing goes back to Aristotle, but it wasn’t until early in the twenty-first century that scientists fully understood the process. I can give a rudimentary summary of the process but I don’t know how to do that without using some easily forgettable technical words. Firefly bodies contain two chemicals essential to the process of lighting up, luciferase and luciferin.  (Both names are derived from the name Lucifer, the lord of a fiery place.)  Fireflies can regulate the flow of oxygen into their bodies so that it enters in a pulsing pattern, and when the oxygen combines with those two chemicals—along with a third element, ATP—they glow.  The third element, adenosine triphosphate (ATP), is an energy-storing compound found in every cell of every living animal or plant on earth.

There are some remarkable medical uses for the chemicals involved in making a firefly flash.  The firefly chemicals (luciferase and luciferin) cause what is known as a bioluminescence, which is a light without heat.  They can be injected into a human cell, where they combine with ATP, and emit a glow that can trace the cell’s activity.  This process has been used to trace cancer cells, to determine if a person has had a heart attack, to detect contamination in food, to understand the function of genes, and to develop new drugs to treat and cure diseases.  The full extent of the practical use of these chemicals is still being developed.

NASA has also found an unusual use of the firefly lighting process.  The Viking Explorer, which landed on the surface of Mars, had a device for detecting the presence of life that included the firefly chemicals. This device gathered a Martian soil sample, ground it to fine dust, and mixed it with luciferase, luciferin, and oxygen.  If the result had been a glow it would have indicated the presence of ATP, a sign of life.  There was no glow.

Although both of the chemicals involved in firefly flashes can be made synthetically, in many places scientists pay people to give them fireflies. That encouragement to capture fireflies, along with habitat loss and increasing light pollution, is causing a decline in their population.

They live independently and in harmony with everything and every other animal in their surroundings, and their guts can be used to diagnose cancer in humans and to look for extraterrestrial life!  Wow!