Several years ago I published a Seeing the Sourlands essay on dragonflies and damselflies. I am doing another one now because in the intervening years I have become an avid watcher of dragonflies and damselflies. After years of bird watching, I started paying attention to butterflies as well, and now I also keep an eye out for these enchanting insects. It has been hard to learn about dragonflies because they are small, quick to fly away in fright, and confusingly marked, but it has also been fun. I found that the best way for me to learn how to identify them is to photograph them, blow up the images, and check a field guide. Here are some of my recent photos and some newly gained information 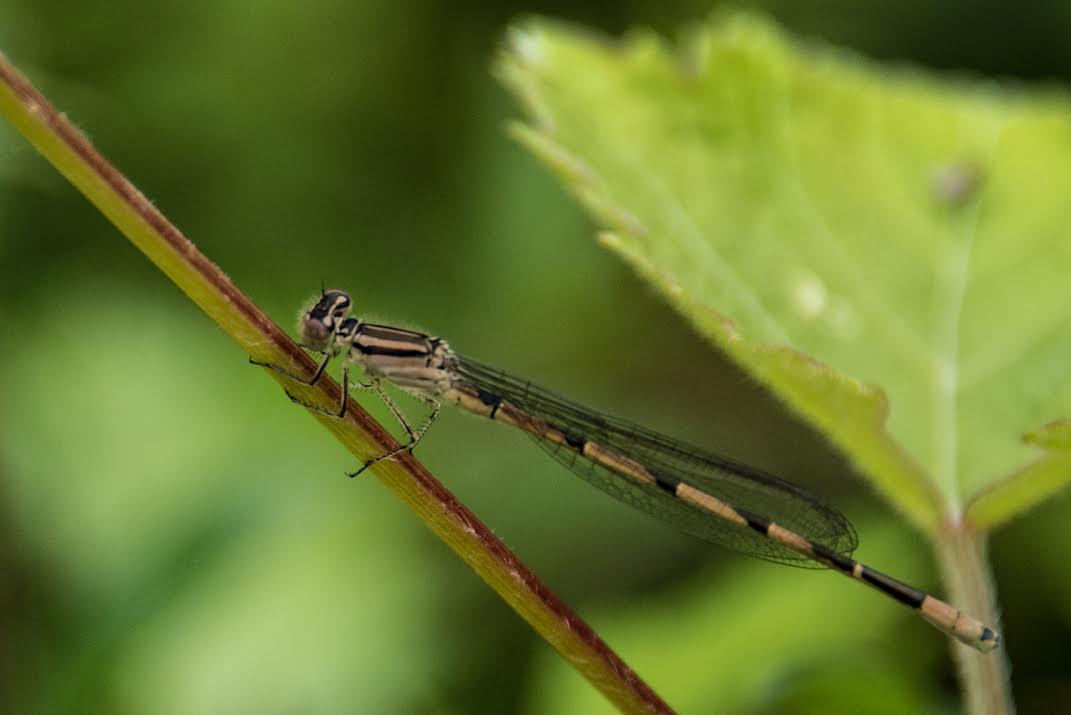 The terminology associated with damselflies and dragonflies is a little confusing.  They are considered separate suborders of the order Odonata but writers often simply refer to both suborders as “dragonflies.”   The word “Odonata” is derived from the Greek word for teeth despite the fact that they do not have teeth; they have strong mandibles, or jaw bones. They did not have common names until the late 20th century because there was little public interest in them.  Then two scientists wanted to create greater interest so they made up their common names.  Luckily these scientists had a poetic sense, so we have evocative and enchanting names like “dancers,” “sprites,”  and “jewel wings.” 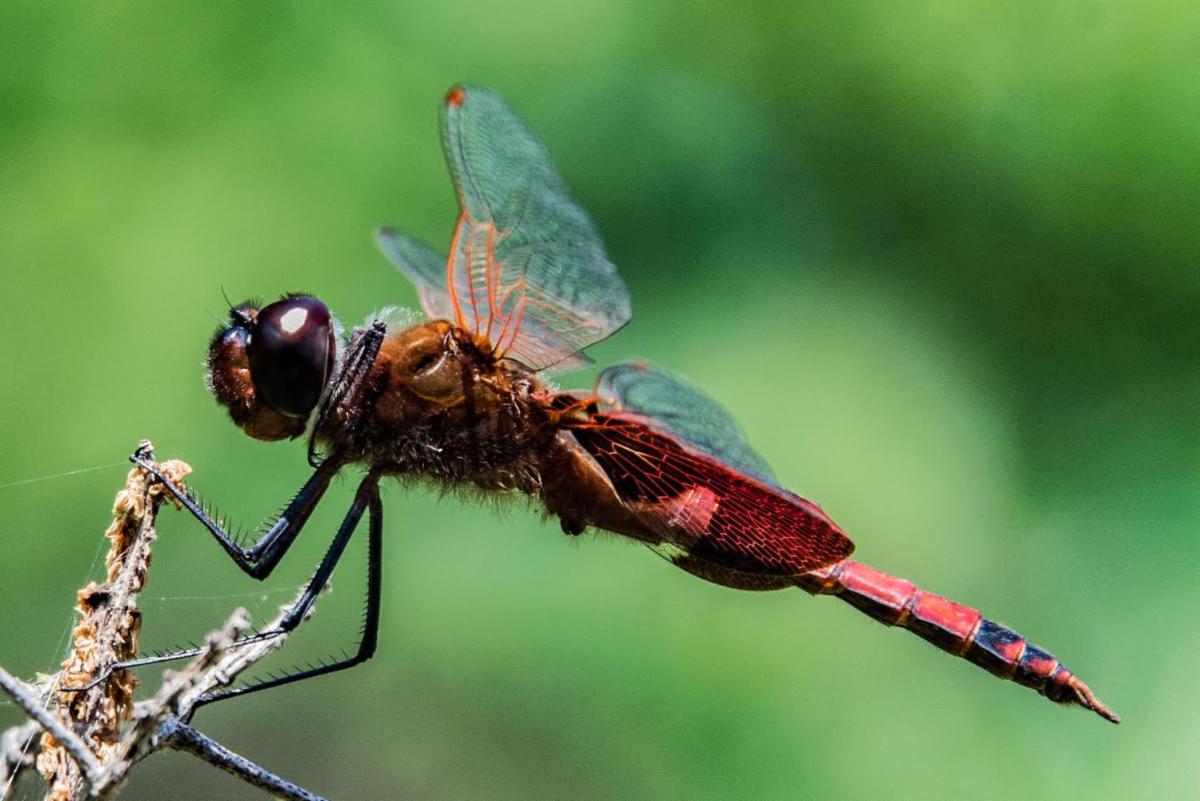 All Odonata start life as eggs laid in or near water.  After hatching, the nymphs live for about two years in the water, looking nothing at all like dragonflies or damselflies, and morphing several times into larger and larger sizes.  They eat small water-borne insects like mosquito larvae and other Odonata nymphs.  They have what I actually read as a “remarkable rectum.”  Like most animals, they use their rectum to eliminate waste but they also use it to drawn in water, from which they extract the oxygen they need to live.  When they eject the oxygen-depleted water they do it in jets, which propels them.  After morphing into adults they usually live for a couple of months, flying around eating the adult species of the same insects that they ate as nymphs, including smaller Odonata.  In both nymph and adult form the larger Odonata are the major prey of smaller Odonata. 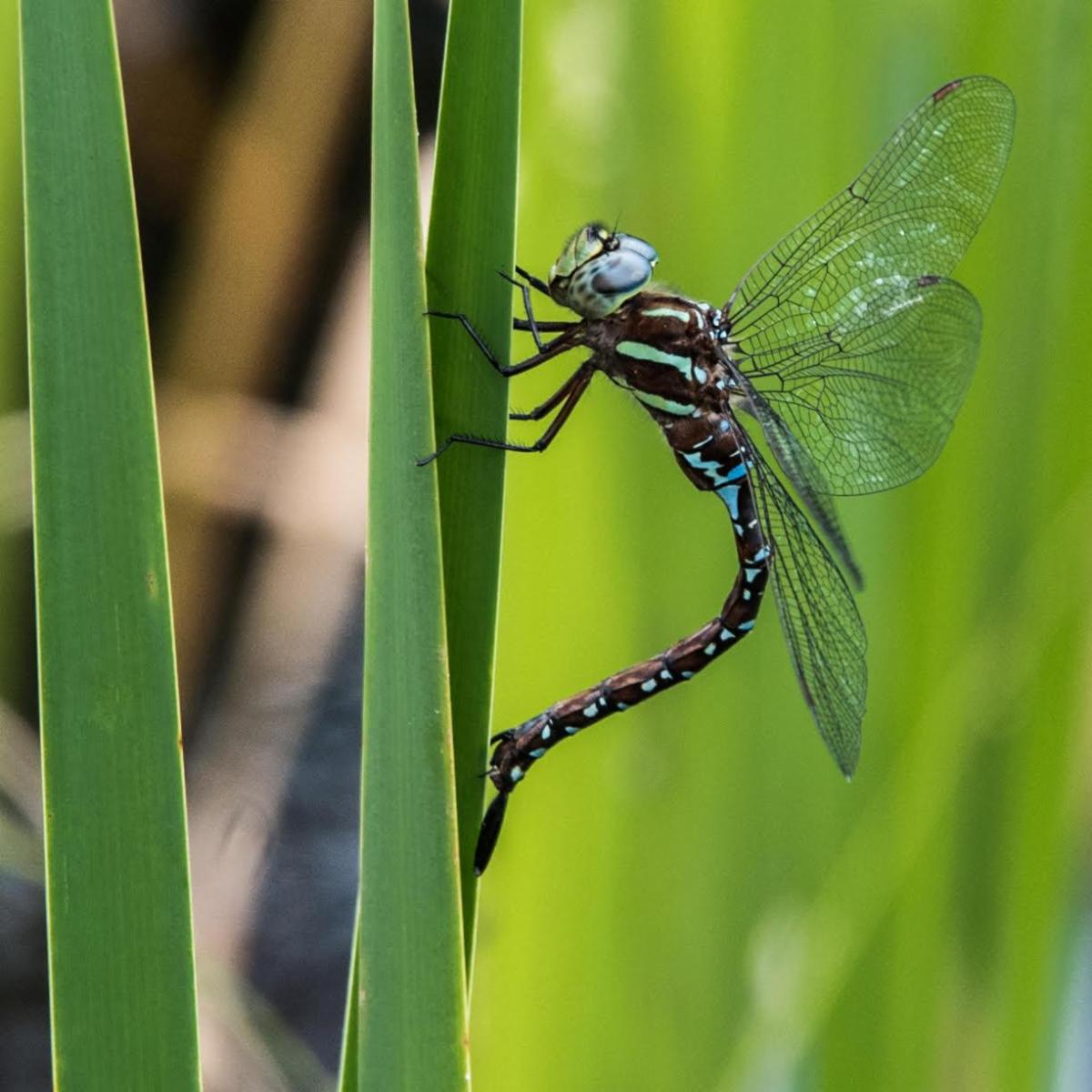 Odonates are really light; the heaviest dragonfly weighs a little over a hundredth of an ounce.  That means that if you could pack ninety of them into an envelope you could mail it with one first class stamp.  This light weight gives them great dexterity and speed of flight—they have been called the best fliers among insects—but it also presents problems on windy days.  They usually seek shelter then, but sometimes they use the wind to fly long distances downwind to a new habitat.  They have the unusual ability to rotate their wings like an airplane propeller as well as the common up and down beat.  They can fly forward at one hundred body lengths per second, backwards at three body lengths per second, and they can hover.  They can fly straight up and straight down, turn rapidly, or move slowly forward. 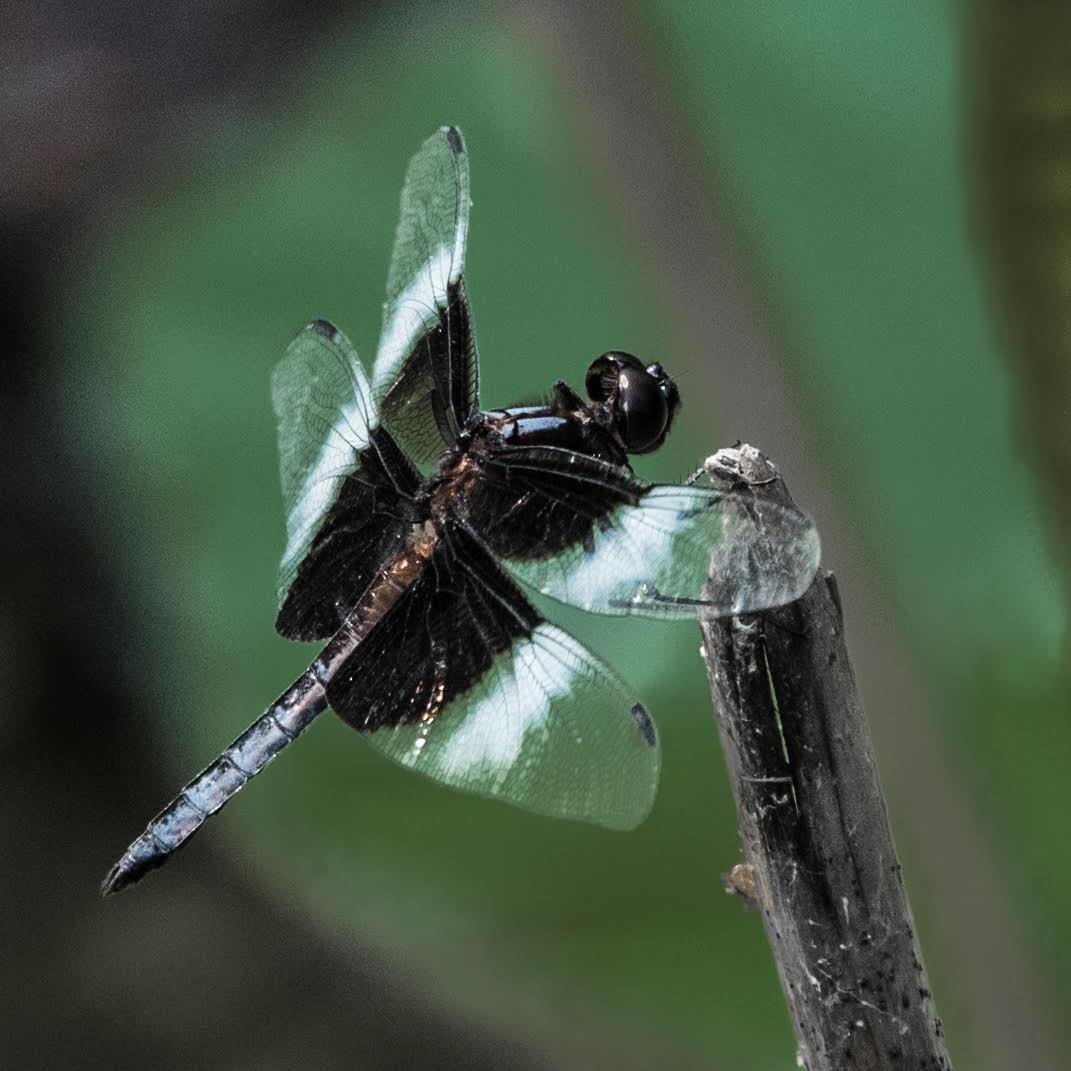 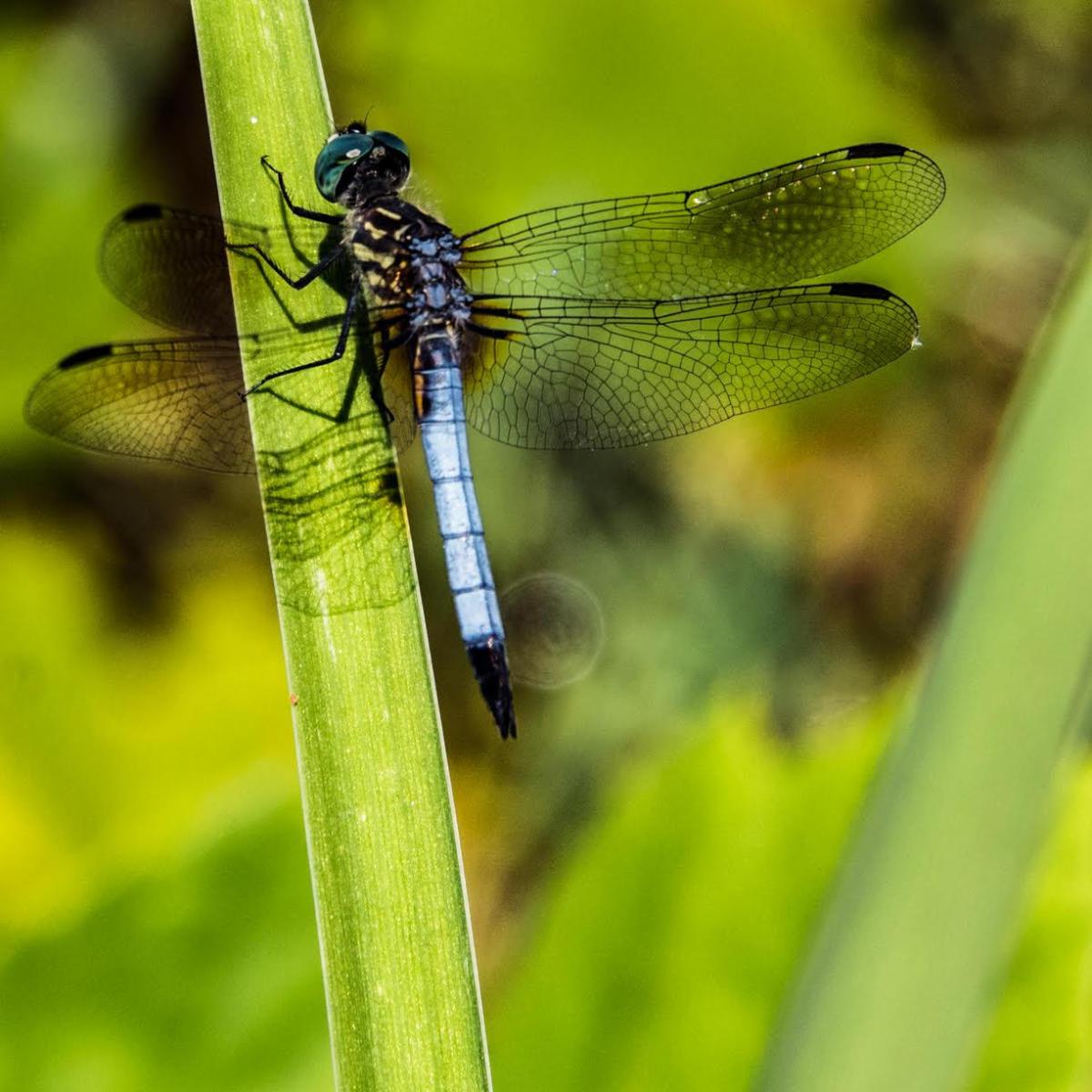 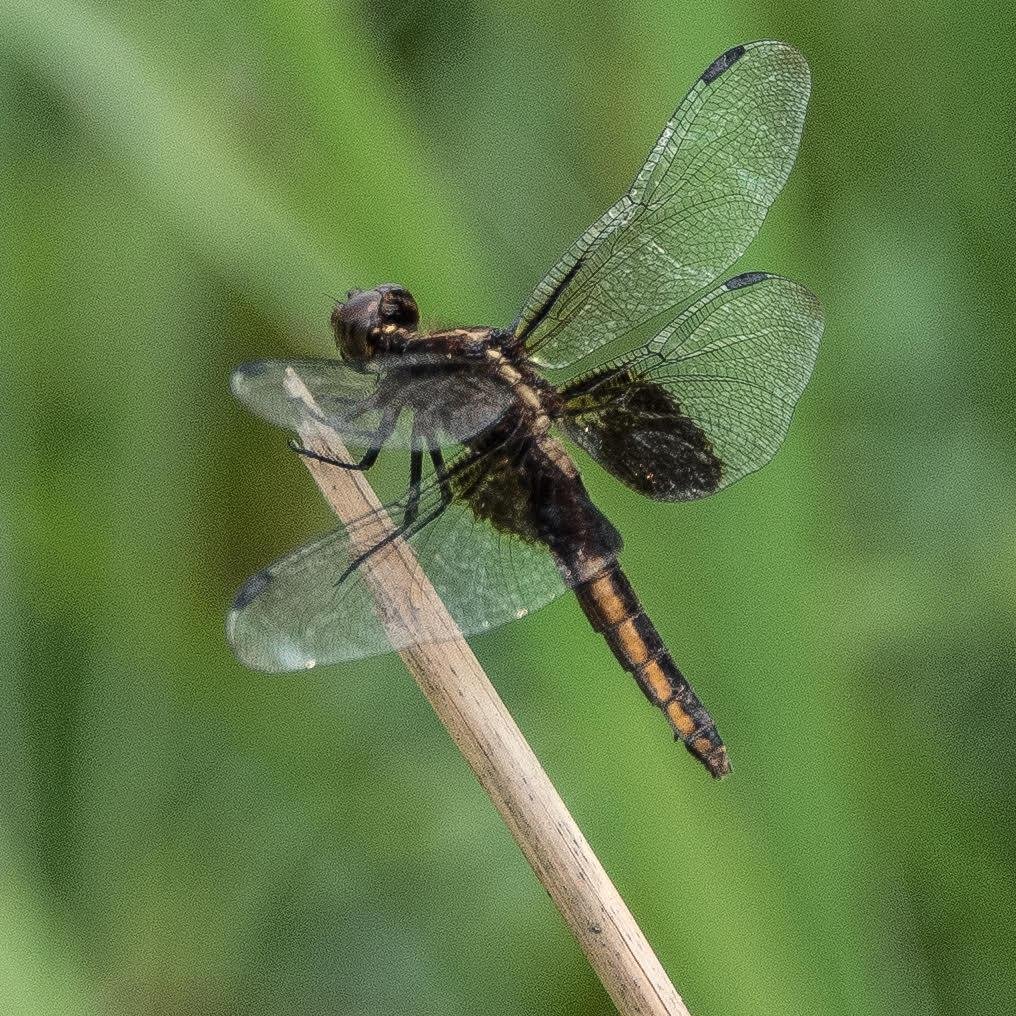 Odonata bodies are divided into three parts, the head, thorax, and abdomen.  Their heads contain their eyes—two complex eyes that contain about 30,000 receptors each, which gives them almost 360-degree vision, and three other eyes that mostly are used for generally for orientation.  Their mouths and brains are also in their heads.  Their heads seem loosely connected to their thorax but that gives them greater ability to move their heads around.  Their thorax contains the muscles for their six legs and four wings. The third part is their abdomen, which sticks out from the read of the thorax.  It is longer than seems necessary but it gives counterweight to the weight of their heads.  The abdomen contains their digestive and reproductive organs. 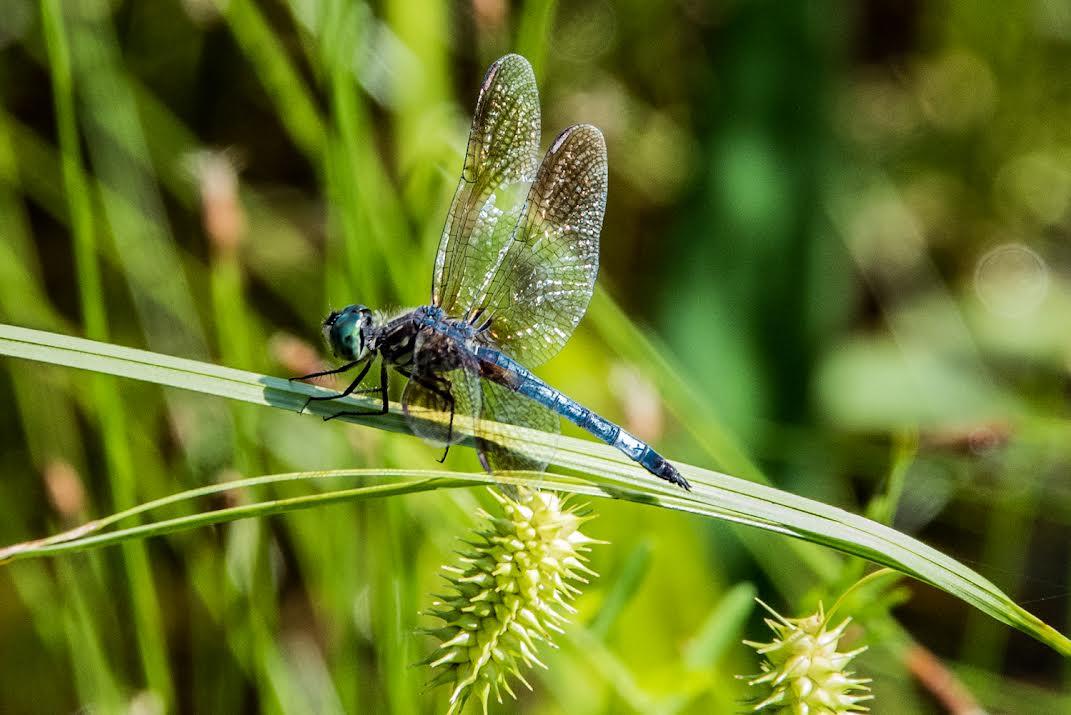 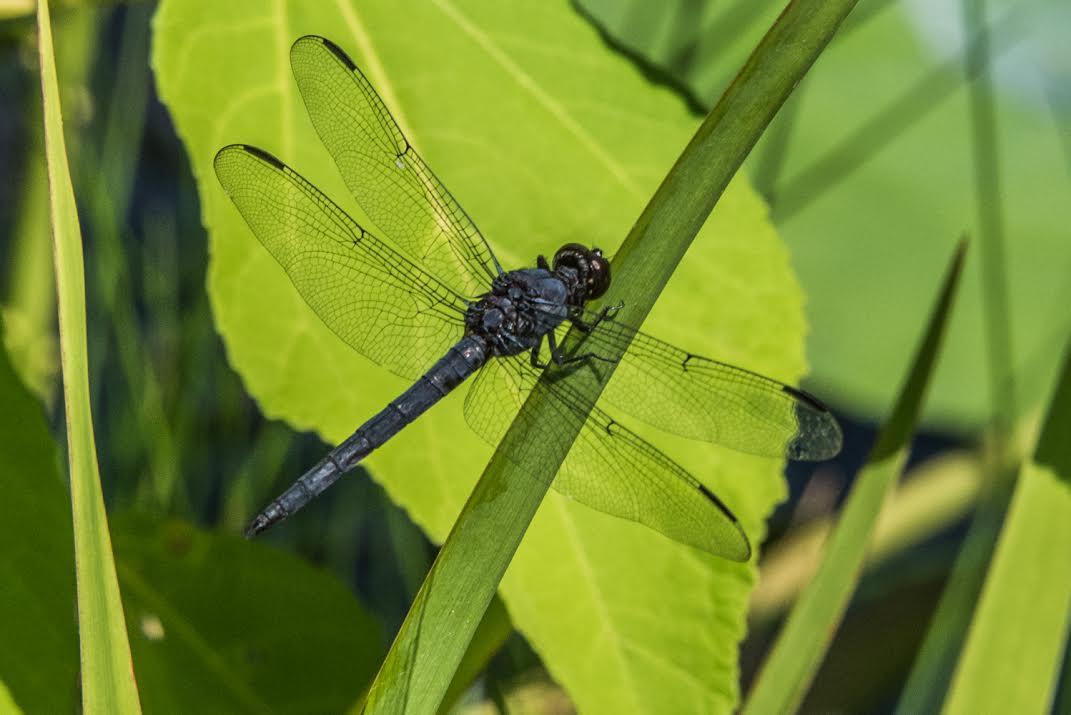