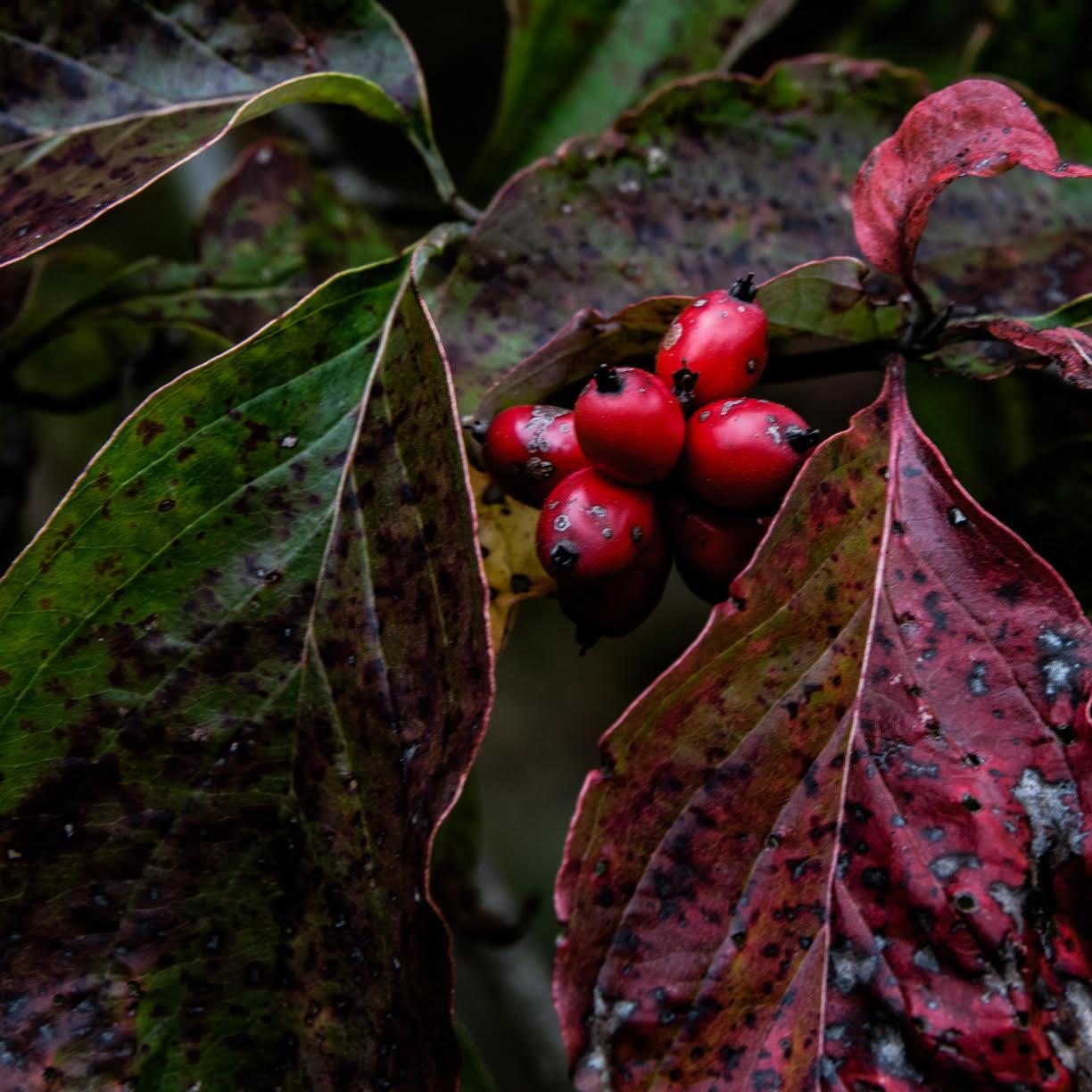 In autumn the leaves on flowering dogwood trees turn bright colors early and stay on the tree for a long time. 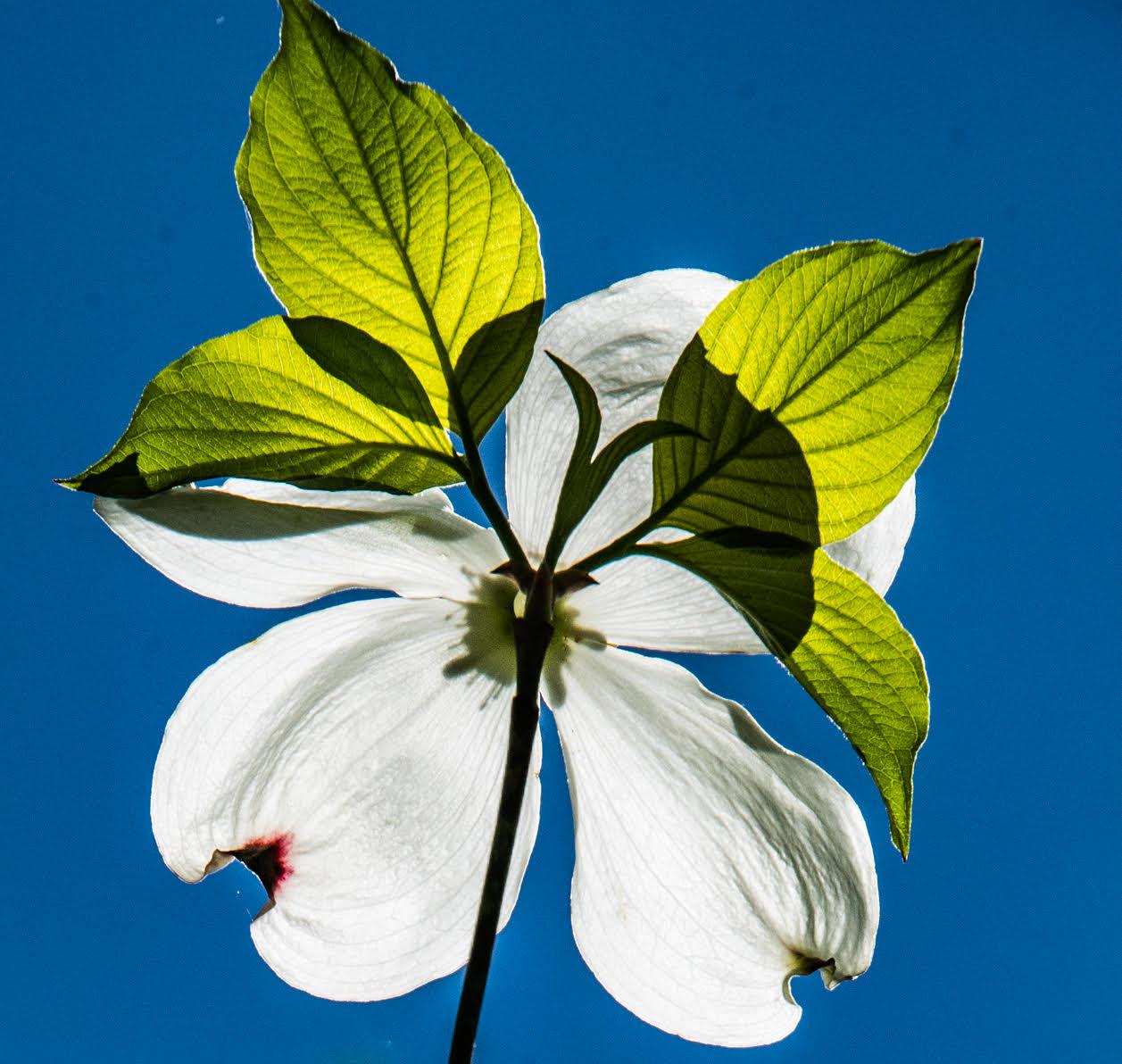 There is a myth that dogwood trees were once tall and straight like oaks, and that the wood from a dogwood tree was used to make the cross upon which Jesus was crucified. There are two different versions to the next part of this myth. In one, God was so annoyed at dogwoods for the role they played in Jesus’s death that he made them short with twisting limbs from that time on. In the other version, the dogwoods were so ashamed of what had been done with their wood that they transformed themselves into small trees with twisted limbs. That myth is matched by an equally impossible myth that the cross was made from aspen and that aspens have felt so much shame for their role in Jesus’s death that they have been quaking ever since. Both trees are native to North America and neither was growing in the Middle East two thousand years ago. Nor is there fossil evidence of dogwoods ever being tall, straight trees. I tried to find out what tree was used for crosses two thousand years ago, but no one knows for sure. The best guesses are that they were made from cedar, pine, or cypress—trees that were commonly used for structures at that time and place. The origin of the dogwood myth is unknown; I thought at first that it might have been derived from a Native American myth about dogwood trees but I could find nothing to support that possibility. Native Americans viewed dogwoods as symbols of safety, and they used the bark and roots for medicines and dyes, but they never believed that they were once tall, straight trees.

It may be the dogwood’s flower—or to be technically correct, the bracts—that gave rise to this myth. The lovely white petals of a flowering dogwood tree are not actually petals of the flower; they are bracts–modified leaves that surround a flower. Usually, bracts are less conspicuous than the flower, but sometimes, as with flowering dogwoods or poinsettias, they are far showier than the little cluster of flowers that they surround. Dogwood flowers have four bracts, in a cross-like pattern, with two that are larger than the other two. Further, the outer tip of the bract is indented—it looks a little like a nail was driven into it—and there is often a touch of red around the indentation—possibly symbolizing blood to true believers.

I love flowering dogwood trees and I have always thought that anything that beautiful can be fully enjoyed without myths or facts about its ecological role. But while researching dogwoods I have learned a few interesting facts about their role in an ecosystem. First, dogwoods can absorb calcium from the soil and rocks around them more efficiently than other tree species. The calcium is concentrated in their leaves and fruit, so every autumn, when dogwood trees drop their leaves, they are showering the surface of the soil with calcium, which is used by other plants and many animals. Someone did a Ph.D. thesis on land snails beneath dogwood trees and discovered that snails are more common there than under other species of tree. Snails make their shells from calcium, and when birds eat the snails they obtain calcium to make shells for their eggs. Some mammals also eat snails and doing so builds calcium in their bones. Plants also benefit from calcium, which strengthens the walls of their cells.

Another interesting fact about dogwood trees is that they have a highly branched root system, and that water permeates their roots more easily than the roots of other tree species. Further, they are able to achieve maximum photosynthetic rates even with low levels of light. Those qualities make them especially efficient at making glucose through photosynthesis and at bringing in water, enabling dogwoods to be healthy under stressful conditions.

The fruit of dogwood trees—those clusters of bright red berries—are important food for more than seventy-five species of birds and for mammals ranging from mice, squirrels, and chipmunks to foxes, bears, and deer. The fruit, like the leaves, is high in calcium but it is also high in fat, both of which make it an especially nutritious meal for wildlife. After reading about all the animals that eat the dogwood fruit, I decided to give it a try myself—I am writing this in mid-October—so I picked one of the berries from a dogwood in my backyard and bit into it. It was mildly bitter, better tasting than a spicebush berry but not nearly as good as a blackhaw viburnum berry; it is not something that I am likely to try again. That experience, however, led me on a tasting trip to a nearby nature preserve. I tried a very small yellow crab apple and a very small red one; both tasted faintly like apples but were not good. I tried rose hips from a marsh rose—not bad—and a multiflora rose—not good. I ate the fruit from a couple of autumn olive trees and found that one tree had tasty fruit while another had bitter fruit. I tried a wild grape and found that it, too, is bitter. I began to long for the time earlier in the summer when blackberries were plentiful and delicious.

A question that I had hoped to answer through my research on dogwood trees is how they got their name. There are many theories—none is as bizarre as the theory of why dogwoods are short with twisted branches—but unfortunately, no one really knows.