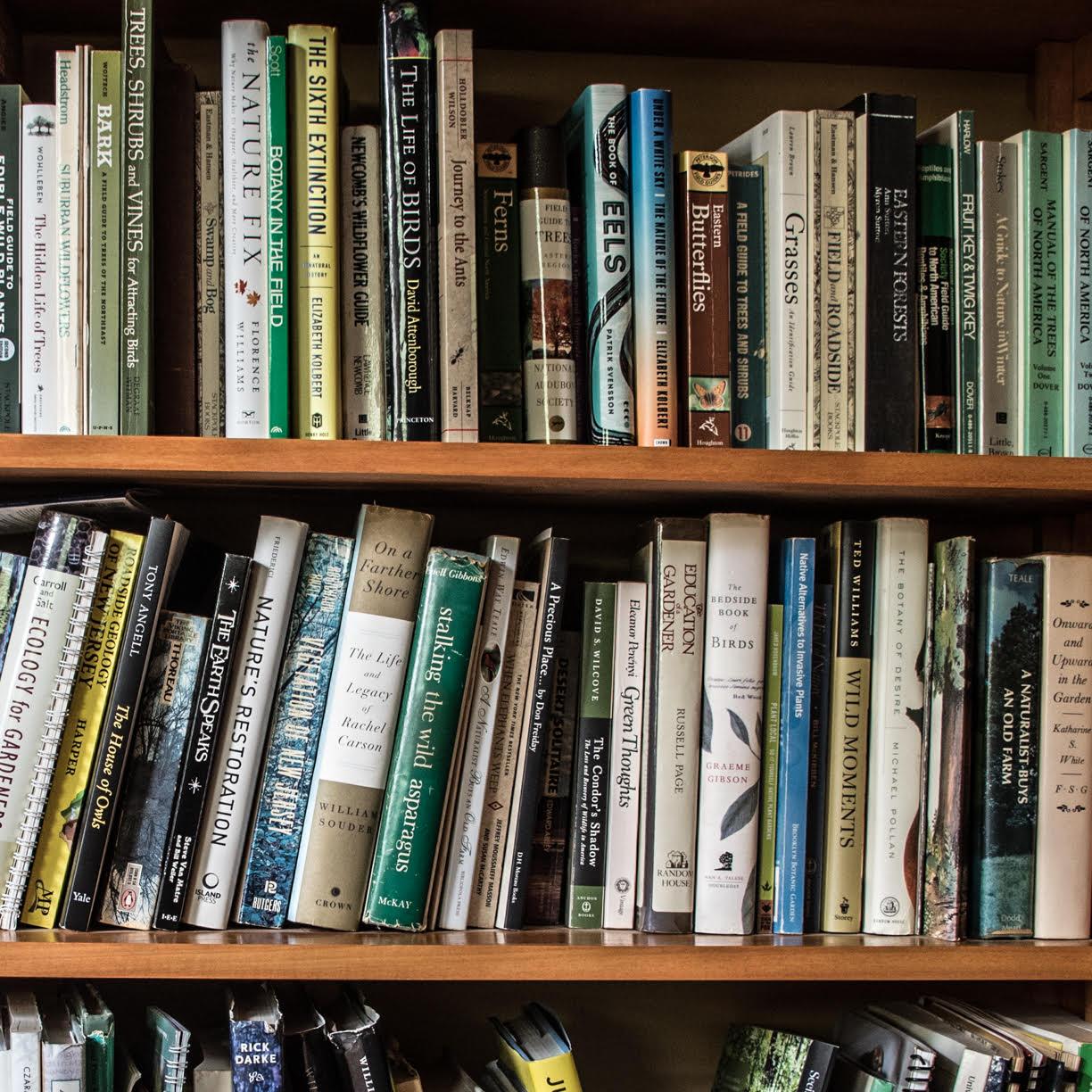 My bookcase is not organized in any logical way—or more accurately—not in any way at all.

I wasn’t expecting the question and I completely flubbed the answer when someone asked me, “What are your favorite books on nature?” I stammered around a bit and named a couple of books that I had just finished reading, not necessarily books that I would actually recommend. Since then I have been thinking about the answer I should have given, but the more I thought about it the harder it was for me to think of an answer that satisfied me. I read ten or twelve books on nature a year and I have been doing so for long enough that it should be easy for me to rattle off five or six titles to recommend. Most of what I read, however, is pretty specialized, and not particularly suitable to be recommended to someone I don’t know. Right now, for example, I am reading DRAGONFLIES AND DAMSELFLIES OF THE EAST, by Dennis Paulson. I am reading it because I have recently developed an interest in odonates (dragonflies and damselflies are parts of the order Odonata) and I am trying to learn more about them. The text part of the book is a great introduction to these lovely and weird little insects and I am anticipating extensive use of the rest of the book, which is essentially a field guide. But would I recommend this book? Sure, if I knew you were interested in this subject, but never to a stranger.

Many of the books I have read in the last few years are in the same category as Paulson’s dragonfly book. For example, SEEDS, by Thor Hanson is well written and full of information about how seeds work and how they have changed the world. (The first land plants on Earth propagated themselves by spore, not seeds.) It also contains some delightful surprises. Hanson notes, for example, that there are three parts to a seed—an embryo, the nourishment that the embryo needs to start growing, and an outer shell that protects both the embryo and the nourishment. Hansen calls this “a baby in a box with its lunch.”

Two books that are specialized, but that I recommend without hesitancy, are FINDING THE MOTHER TREE by Suzanne Simard and ENTANGLED LIFE, by Merlyn Sheldrake. Simard has done path-breaking work on how trees communicate with each other—in fact, how all plants communicate—through the underground network of mycorrhizal fungi. After reading her book I see forests differently, knowing that all the plants are connected. While she was revealing this wonderful information I felt that I got to know her a bit; she touches on her struggles as a woman in a man’s field (she was a forester before she became an academician), and she gives glimpses into her personal life. I grew to like her and it always helps me to read a book when I feel a connection with the author. A far more popular book, THE HIDDEN LIFE OF TREES, by Peter Wohlleben, covers this same topic. I don’t have problems with the science in Wohlleben’s book, but I don’t remember ever being as annoyed at an author as I was while I read his book. He is forever telling us what trees “want,” or what they “love,’ or “hate,” and about their great empathy for each other. His anthropomorphism is relentless, and I found it totally annoying. Simard gives us the science without making trees into some sort of sub-humans.

Sheldrake’s book on fungi covers a topic in which—until I read his book—I had only mild interest; he discusses wonderful things about this mostly unseen world. In the introduction, he says that fungi “. . . are eating rock, making soil, digesting pollutants, nourishing and killing plants, surviving in space, inducing visions, producing food, making medicines, manipulating animal behavior, and influencing the composition of the Earth’s atmosphere.” He explores all of that as well as the ways that fungi are now being used to make buildings. I think that anyone with a curiosity about the world would enjoy his book.

A common format for books on nature is a diary of the author’s experience and insights into the natural world. One of my favorite authors, Bernd Heinrich, has done this with A YEAR IN THE MAINE WOODS. Heinrich has written on many aspects of the natural world and I have enjoyed all of his books. I think of him as a kind of gonzo naturalist; he brings great energy to his interaction with nature and he writes about it in a way that makes his energy attractive.

My favorite book in the diary format is THE FOREST UNSEEN, by David George Haskell. Haskell went to the same spot in a forest for a year and wrote about what he saw there and what he thought about. I liked this book so much that as soon as I finished it I went back to page one and re-read it. At one point Haskell tells us that one bitterly cold winter morning he was musing about how animals survive in the cold without polyester, nylon, and down, so he took off all of his clothes to see what would happen to him. Luckily, it didn’t take long for him to put his clothes back on after he began shivering uncontrollably. You have to love a guy who is that involved!

Many nature books warn us of the terrible things that we are doing to our planet. Bill McKibben’s THE END OF NATURE may be the best known in this category and deservedly so—it is excellent, but I prefer and recommend Elizabeth Kolbert’s books THE SIXTH EXTINCTION and UNDER A WHITE SKY. They are both frightening books. In THE SIXTH EXTINCTION, she chronicles the present disappearance of animal species that is occurring as a consequence of human actions. Proposals for reversing global warming that Kolbert examines in UNDER A WHITE SKY range from exciting ideas about capturing carbon directly from the air, to what seems to me to be a harebrained idea of spreading large amounts of pulverized diamonds in the sky to scatter sunlight back into space.

A final category that I want to mention is books that inspire us to love the natural world and to treat it properly. Aldo Leopold’s A SAND COUNTY ALMANAC is the granddaddy of this kind of book and it has probably inspired more people than any other nature book. Fifty years ago, when I first read it, I devoured every page and liked it so much that I kept buying new copies and pressing them on friends, or insisting that they read it. I re-read parts of it before I wrote this essay and I was greatly disappointed that I did not love it anymore. It seemed forced, with Leopold ascribing wisdom to chickadees, rivers, and north winds. Leopold is a beautiful writer, however, and I decided that it is a book to read in short pieces like it was probably written.

I don’t know how to categorize it, but I feel compelled to mention one more author. A man with the improbable name of Verlyn Klinkenborg, who used to write a column in the New York Times on life on his farm in upstate New York. He doesn’t really write about farming, but about wandering around on his farm, observing what is there and writing about it beautifully. He has collected his essays in a book called RURAL LIFE and a second book entitled MORE RURAL LIFE. I have aspired to write like Klinkenborg. His pieces are informative, personal, humble, and interesting.

Now that I have gotten started, I can’t seem to stop. I must mention one more book, Joan Maloof’s TEACHING THE TREES. Maloof has compiled fifteen essays on common trees in the eastern forest. (There are also some essays on “grandfather trees,” and “baby trees.”) Each essay describes a tree, but it also examines the ecology of the tree—the birds and mammals that depend on it and the insects that it feeds. We learn to see each tree as the basis for an entire universe. I have read every essay at least twice and some of them three or four times. Each reading has been rewarding.