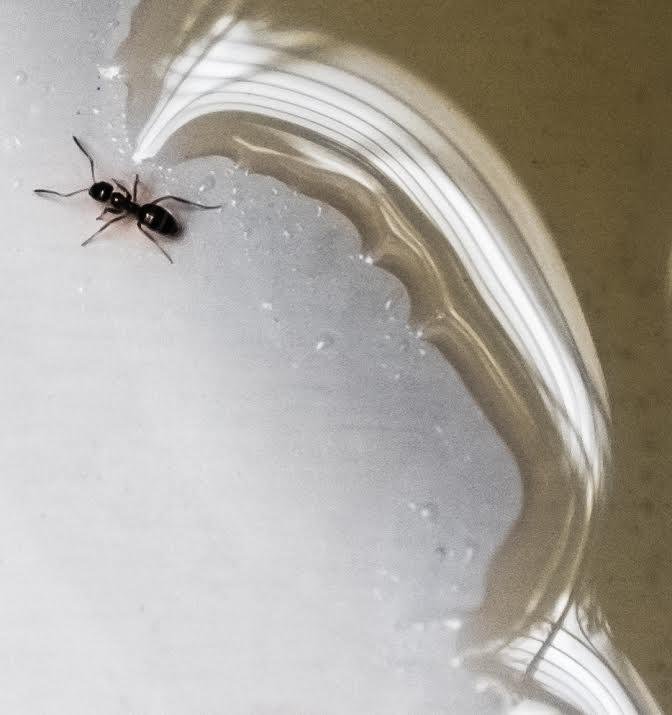 I was having a little trouble getting a photograph of an ant so I put a drop of honey on a jar lid and set it out on my patio. Within half an hour this ant showed up.  Shortly afterward the lid was full of ants feasting on the honey.

I unleashed a frenzy of activity one July day when I turned over a rock in the Sourlands.  Little black ants began racing around in the bare depression where the rock had been; first, they ran to a pile of what looked like miniature rice—it was actually ant eggs—then each ant picked one up and rushed into a hole with it.  Soon all of the ants, and all of the eggs, were out of sight. In JOURNEY TO THE ANTS, the great book on ants by E. O. Wilson and Bert Holldobler, they recount how a similar experience when Holldobler was a boy started him on a lifetime as an entomologist.  I am a little past starting such a lifetime, but I found it so interesting to watch those ants scurrying to protect their nest that I decided to read more on these insects and to write an essay about them.

Shortly after I started my research, I learned about the unusual, no, the truly weird, process of ant reproduction.

At the heart of every ant colony is a queen.  Her job is to found the colony and then to produce babies. A queen only mates once in her life and on that occasion, the male’s sperm does not enter her reproductive channel.  Instead, it goes into a container near her abdomen where it remains viable for as much as fourteen years, the maximum lifetime for an ant queen. Depending on her species, the queen can produce hundreds or even up to one hundred and fifty million female worker ants and scores or hundreds of male ants. This imbalance between the genders occurs because the queen controls a valve between her sperm container and her reproductive tube. Most of the time she keeps the valve open, which allows the sperm, usually singly but sometimes in small batches, to fertilize her eggs.  Fertilized eggs produce female ants, the colony’s workforce.  If the queen closes the valve, the unfertilized eggs become males.  The males contribute nothing to the well-being of the colony.  They don’t even feed themselves; they must be fed by the female workers. All of the female workers have the potential to become queens but the queen can release a chemical that prevents them from developing ovaries.   If the queen doesn’t release that chemical, however, and if the temperature of the nest is right, female workers who have been selected to receive a special diet will develop reproductive organs. These select ants are called “virgin queens.”  Once a year, usually in early autumn, the virgin queens and the males grow wings and take flight.  While in flight they mate, then all the males die.

The flight, however, is full of peril.  Birds, dragonflies and other winged predators feast on the flying ants.  Car and truck windshields smash many of them.  Some will have flown over water or impervious surfaces and when they land they drown or cannot find a suitable place for a nest.

Even if the females land safely they still face many dangers.  More birds, as well as toads, frogs, centipedes, several spider species, and other predators form a gauntlet that they must navigate while they seek a suitable place to dig a nest, enter it and begin the cycle of starting a new colony.  About one out of a hundred virgin queens become an actual queen.

Before I can go any further I need to make a cautionary statement.  There are known to be about 12,000 species of ants in the world—74 species are known to live in New Jersey—and it is possible that these numbers only represent half of the total number of species. Therefore no statement can possibly describe all the species.  Whatever I say about ants is a statement about most ants, or the most common ants, or both.

Ants are highly successful by two important measures, longevity as a species and population size.  They have been around for 100 million years since dinosaurs ruled the land. Today the biomass of the world’s ants is probably equal to the biomass of the world’s humans.  They are so successful because they have a finely developed, overwhelmingly cooperative, self-sacrificing society.  For ants, the colony, not the individual, is the meaningful unit.  If, for example, a colony decides to move to a new nest the jobs are divided among the workers.  Some dig the nest.  Some move the queen, her eggs, larvae and the pupae.  Some patrol the route from the old to the new nest, ready to battle with anything that threatens the move and seemingly willing to sacrifice their lives if necessary.  Some patrol the entire operation, ready to fill in if one of their mates falters or dies.

Ants have many ways of communicating with each other. They release airborne pheromones to convey different messages, including attraction, recruitment, alarm and to distinguish between their nestmates and ants from another colony.  They extrude an enzyme that creates a trail between their nest and either food or the enemy.  They touch each other with their antennae or mandibles to give messages, and they sometimes, like bees, do a little dance to communicate a message.  Although ants do not have ears and cannot hear, they can make sounds by rubbing body parts together and other ants get this audible message by feeling the vibrations through their feet.  The intensity of all these ways of communicating can be modulated to either emphasize a message or change its meaning subtly.

Communication unites ants when they are searching for food. Some workers patrol for food, which often is dangerous.  On average, 15% of the workers die on every food expedition.  Ants have an extra stomach which they fill, return to the nest and regurgitate its contents to feed other workers who may have been maintaining the nest, caring for the eggs, larvae or pupae or for the queen.

Ants are continuously at war, which requires a lot of communication because their wars are not one on one but colony against colony.  They fight to maintain territory, to protect the nest, or to protect sources of food.  Ants are fierce in battle.  One of their techniques is to use their mandibles to hold on to the enemy while spraying it with a deadly chemical.  Sometimes they use their mandibles to cut off an enemy’s legs or even to decapitate them.  In one species, if the warriors from one nest have driven the enemy back to its own nest they will gather around the nest opening and spray their poison down the hole.  Another species will, after driving the enemy back into the nest, drop small pebbles into the entrance.  In a really successful battle, the victors may invade the enemy’s nest, killing all of the ants they encounter, including the queen.  Then they steal the enemy’s pupae and eggs and raise them as their own.  They may capture the enemy ants and enslave them.  Or they might eat the dead enemy ants.  Ants may be the most aggressive and warlike of any animal.

Several species of ants practice agriculture.  Leafcutter ants use the leaf parts they bring back to their nest to cultivate fungi, which they eat.  Some species steward aphids in a process that is similar to a cowherd stewarding his cows. The aphids secrete ”honeydew” that ants eat, so they carry the aphids from plant to plant and by gently rubbing the aphids’ heads with their antennae they induce the aphid to emit the honeydew.  In return, the ants protect the aphids and sometimes even house them in their nests.

There is an old science fiction theme that after a nuclear holocaust kills all humans the cockroaches will take over the world.  I have never bought into that idea but I am not so sure that ants couldn’t dominate a post-cataclysmic world.